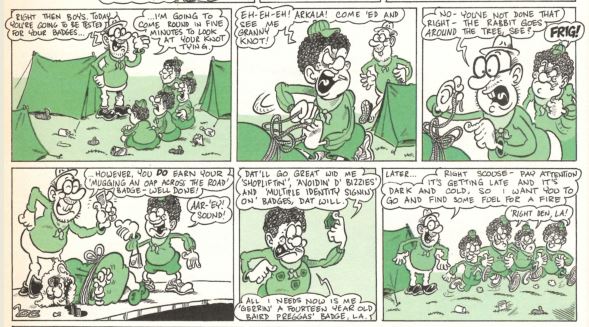 Over the last week or two, we've been working on the Directed Writing part of Paper 2 and thinking about ways to make the opinion pieces both rich in language knowledge - so the reader is actually informed and educated about language - and able to grasp the main ideas without being a specialist.

Having set a task on the language of social groups in which quite a few students erred on the side of catchiness and style over language content, with a few swinging the other way and writing things that were more like essays than articles, I put together the following as a worksheet for the best part of a double lesson. We're going to use it next week and see if we can get the opinion pieces a bit closer to what I think the mark scheme can reward.

Obviously, there's more to this kind of writing than just aiming to hit the different bands on the mark scheme and I'd encourage students to read as wide a range of opinion pieces - op-eds in papers, online articles like those on Comment is Free and Indie Voices and perhaps a few pieces from better blogs (eg Deborah Cameron's brilliant Language: a feminist guide) to get a real feel for the ways arguments and opinions are structured and shaped, but in the classroom we probably need a bit more scaffolding, so here it is...

Part of your job in the Directed Writing task is to explain linguistic concepts to a non-specialist audience.

This means that
a) you need linguistic ideas to explain and
b) you need to develop a way of making them clear and intelligible to your readers.

In practice, this means you will need to do the following:


In the example below (taken from here), there are some important linguistic ideas and technical terms, but it’s not very accessible.

How would you deal with it to make it more relevant and clear for your target audience?
What are the key bits to focus on?
Which bits can you ignore, summarise or just mention very briefly?
How would you make this relevant to a reader of a broadsheet newspaper in the UK in 2016?

Penelope Eckert (2000) studied the language use of American high school students who called themselves Jocks and Burnouts. These two subcultures were associated with sharply contrasting personal styles. Jocks participated enthusiastically in extra-curricular activities, played sports, served on the school council and hoped to graduate to college. They took the school as their community and hence the basis of their group identity. In the 1980s, when Eckert did her research, they wore smart designer jeans, the girls used candy coloured make-up and the boys had short hair.


The Burnouts, in contrast, did not participate in school social activities and resisted the corporate identity of the high school and what it stood for. They wore bellbottom jeans, rock concert T-shirts, sweatshirts and auto-plant jackets, and expected to work in local industry when they were older. They were more likely to be out at an all-night party in the town than at the school dance. There were differences, too, in the language styles (pitch, pronunciation and grammar) used. Eckert sees these two subcultural groups as representing two different kinds of response to the school institution, and as involving students in alternative ways of negotiating their individual identities, their ‘meaning in the world’ (Eckert, 2000, p. 41).


She suggests that Jocks and Burnouts are two different ‘communities of practice’, each involving students who have come together to share ways of doing things and ways of talking, beliefs and values, as a function of their shared engagement in the activity. Individual identity is constructed in collaboration with others in and around these communities of practice.

How would you then link what’s here to some of the ideas that you covered in your own opinion piece about the language of social groups? Which areas would link to this and provide you with a paragraph before and a paragraph afterwards?

The flipside of this is that you also need to have enough language content to secure plenty of AO2 marks, so you need to do more than just recycle generalised, common sense ideas about language in your piece.

The following extracts are accessible and clear but don’t really tell the reader much that they won’t already know. How can you build on the ideas here with some relevant language studies, references to research and linguistic concepts?

For each of the sections below, think of a relevant linguistic reference and a way of integrating it effectively into the article.

Class is one factor in language use, but not the only one. All of us belong to different social groups that relate to our age and activities we engage in. One such group might be young people - a group everyone belongs to at some point in their life – and young people generally use language in different ways to their parents’ generation. One style of language is slang and this is often used by young people to show their own identity and signal their membership of a particular group, as well as showing their distance from others outside their age group.


The activities we engage in are also an influence on our language patterns. Those who work in certain professions or who engage in leisure activities with others are likely to develop a way of speaking that is different. Doctors, teachers, police officers and lawyers all develop their own ways of using precise, technical language.


We don’t just behave in fixed ways with language though and often we might choose to alter our style of language to show that we are closer to others (or to distance ourselves from them). An example of this is when the Chancellor, George Osborne used more colloquial speech when addressing Morrisons workers at a warehouse while campaigning in the 2015 General Election. Instead of pronouncing better and got to with the usual ‘t’ sounds, he used a ‘d’ sound and elided the sounds of separate words to create gotta.