Ring out the old (words); ring in the new (year)

Happy New Year*. And what better way to celebrate the end of 2008 than by looking at its worst words and looking forward to a better year of lexical innovation? Well, I can think of several better ways but they involve Angelina Jolie, a bottle of champagne and a hot tub, but you don't want to know about that. And neither does Brad Pitt - he'd get jealous.

Your mum's so fat she eats deep-fried mars bars

An American academic has claimed that the art of battling, so long associated with rap music, actually has its origins in the Scottish practice of flyting. The Daily Telegraph carries the story here and it's a good read.

Professor Szasz is convinced there is a clear link between this tradition for settling scores in Scotland and rap battles, which were famously portrayed in Eminem's 2002 movie 8 Mile.

He said: "The Scots have a lengthy tradition of flyting - intense verbal jousting, often laced with vulgarity, that is similar to the dozens that one finds among contemporary inner-city African-American youth.

"Both cultures accord high marks to satire. The skilled use of satire takes this verbal jousting to its ultimate level - one step short of a fist fight."

I know I would say this, but this is a point I've been making to anyone who's cared to listen over the last few years of teaching English Language (grand total of listeners so far = 3). And while the academic quoted in the Daily Telegraph, Professor Ferenc Szasz, credits the Scots with inventing flyting, I thought it had existed from way back in Anglo-Saxon times with warriors such as Ragnar Hairytrousers chucking abuse across the battlefield. A fascinating piece on this blog makes a link between internet flaming, Anglo-Saxon flyting and rap battles.

Anyway, it doesn't really matter. I suppose what's interesting is that like so many things to do with language, there are ancient origins or paradigms for most of our current usages. If you can get to it before it's removed, the poet Benjamin Zephaniah has done a really interesting programme on the background to the dozens, a competitive and abusive form of wordplay, which you can find here on I-Player.

And for some light entertainment, try this link for The Pharcyde's excellent track Ya Mama.
By Dan at December 29, 2008 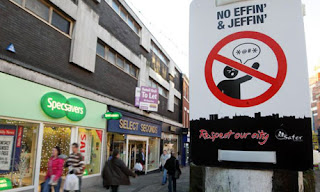 Words don't just change (see below); they sometimes disappear completely. At least, that's what The Daily Telegraph tells us has happened to words like thrush, marzipan and willow in the latest edition of Oxford University Press's Junior Dictionary.

Not only have these words been removed, but they've been replaced with newfangled ones like MP3 player, broadband and dyslexic. While the tone of the article borders on the splenetic (look it up, lexis lovers) to begin with, it does quote some sensible linguists too:

Oxford University Press, which produces the junior edition, selects words with the aid of the Children's Corpus, a list of about 50 million words made up of general language, words from children's books and terms related to the school curriculum. Lexicographers consider word frequency when making additions and deletions.

"When you look back at older versions of dictionaries, there were lots of examples of flowers for instance. That was because many children lived in semi-rural environments and saw the seasons. Nowadays, the environment has changed. We are also much more multicultural. People don't go to Church as often as before. Our understanding of religion is within multiculturalism, which is why some words such as "Pentecost" or "Whitsun" would have been in 20 years ago but not now."

So there you go...at least Christmas is still in it, otherwise I'd be complaining too.

Edited to add: Henry Porter of The Observer has made his own response here. It's a bit verbose (Gilberto, that's you, that is) but has this paragraph which is quite interesting:

However necessary these dull newcomers to the Oxford Junior Dictionary may be, it must be true that with each word and experience excluded, the 21st-century child is minutely deprived. Language becomes more functional, the interior life more arid and the opportunities for rich expression and playfulness fewer.

There's a good piece on the BBC website's magazine about how words often pick up unpleasant meanings as time goes on - semantic change and, in this case, pejoration - and how this happens.

Their focus is on the word "groom" which has shifted from meaning "to beautify oneself or one's steed" (as in "I'm just popping out to groom the pony.") or to prepare someone for a particular position, usually a successor, to having unpleasant connotations of nurturing an unhealthy sexual relationship with (usually) a young person over the internet.

Given the words used in the article (words from, shall we say the "semantic field of Gary Glitter") you might find it a) unpleasant reading and/or b) blocked by your college filter, but if you can reach the link, it's a good read and one that chimes in with many other words that have changed meaning over time.
By Dan at December 08, 2008