Following on from yesterday's post about Russell Simmons of Def Jam calling for an end to the use of the n-word in rap lyrics, and last year's article about New York City Council banning the word, comes a story taken from The Language Log blog about a school in Omaha, Nebraska. The publication of a student newsletter (link to the pdf file here) featuring an article about the n-word and the attitudes of young people towards it has caused a stir in the local community and led to the suspension of the college's principal (since reinstated). I think this is interesting on two fronts: firstly, the language issues - as ever - are pertinent to what we discuss in ENA1, ENA5 and ENA6 about racist language, changing words and debates about language; secondly, as a piece of writing aimed at young people, the newsletter feature is worth a read, particularly if you're looking for approaches to introducing a controversial topic to younger readers. And with ENA6, question 2a being all about doing just that, it would be a good idea to have a look to see what works and what doesn't. More of this in class next week... Useful for: ENA1 - Language & Representation ENA5 - Language Change ENA6 - Language Debates
By Dan at April 27, 2007

It's been an interesting week for all lovers – whoops, I mean students – of offensive language. CBS broadcaster Don Imus – who is white - was suspended earlier this month for referring to a mostly black women’s basketball team as “hardcore hos…nappy headed hos”. The BBC news website helpfully points out:

"Ho" is slang for prostitute and "nappy-headed" is a derogatory term for the hair of many black people.

Meanwhile, Russell Simmons, the boss of the Def Jam record label, famous for its pioneering of early hip hop acts such as Public Enemy, Run DMC and The Beastie Boys (ask your dad…or me), has called on rappers to tone down the cusswords in their lyrics and stop using such terms as “bitch”, “ho” and “nigga”.

An article in The Independent reports:

"The words 'bitch' and 'ho' are utterly derogatory and disrespectful of the painful, hurtful, misogyny that, in particular, African American women have experienced in the ," Simmons' organisation, the Hip-Hop Summit Action Network, said in a statement.

"The n-word is a racially derogatory term that disrespects the pain, suffering, history of racial oppression and multiple forms of racism against African Americans and other people of colour," it added.

The article continues by talking about the origins of hip hop and how the money-driven genre of gangsta rap has fetishized some criminal aspects of the African American underclass, celebrating their anti-social lifestyles in their lyrics.

As language students, we know these words matter, but what is their impact on us and society? If we get rid of the words Simmons suggests do we tone down the most extreme and violent ideas within the lyrics? In other words, if we do away with some of the words will we also do away with some of the extreme feelings provoked by them? Is the use of such words in lyrics actually normalising them? Is it making people outside the group who originally used the terms start to adopt them: wiggas from Norfolk farming villages, 10 year old boys from Peckham, 60 year old radio DJs?

And there are wider issues too. Why has it become acceptable to refer to women as hos and bitches? Who let this happen?

For more on this debate, you could look at this blog and this article on Radio 1 Extra’s website.

And there’s a Haribo-related prize to the first person who can post the name of the rapper whose lyrics are misquoted in the title of this post.

April 10: heard this on my car radio the other day. I'm so in touch with youth culture! My admin assistant Lindsay found the lyrics to Avril Lavigne’s catchy new number 'Girlfriend' for me, courtesy of Yahoo. Here's a typical specimen of the teenspeak the sk8r girl uses so compellingly (is this Valley Girl speak, or grunge-meets-pop?):

Hey! Hey! You! You! I don't like your girlfriend! No way! No way! I think you need a new one Hey! Hey! You! You! I could be your girlfriend …[etc]
I think about ya all the time You're so addictive ...(parental advisory bits censored)[Bridge] She's like SO WHATEVER You could do so much better I think we should get together now And that's what everyone's talking about! …She's so stupid What the hell were you thinking?! [repeat]
Inspired stuff. I posted this on my college VLE forum, when I researched Ms Lavigne’s ‘whatever’ usage:
Further to my posting yesterday : one site I tried is Last.fm, which introduced me to my new word of the day: 'scrobble'...Here's how UrbanDictionary defines it:
1. When Last.fm automatically sends the name of each song played by audio player, they call this “scrobbling.”
The application will scrobble your playlist.
2. Can replace most verbs to indicate that an action has been performed, and that it has been logged or recorded by a 'scrobbler', which is a system that records whatever you're scrobbling, although the scrobbler may not necessarily exist.
If you played 64 games of Fifa 98: Road To World Cup, you could say "I scrobbled Fifa 64 times today." Or if you were on the phone, you could say "I was updating my PhoneScrobbler".

There are more usages and an etymology, but like parts of ‘Girlfriend’, these are parental advisory. Here’s some of my students’ responses…
'My brother has an account with last.fm, which is so annoying cos it makes my computer at home so damn slow, seeming he downloaded the software to go with it, but still! He always uses the word scrobble now, like he uses it for everything! [Note the teen-usage of ‘like’ there!]
It's a very good site mind, there is absolutely everything on there music-wise! You can even have your own top ten, depending on what you have listened to the most.
As has already been said, when you listen to music using a comouter (sic) music player such as iTunes, the music will be recorded as listened onto your account, thus being scrobbled, then put into the chart.
But me being me, listened to some songs [which I am not even going to explain as they are bad] and was accidentally logged into his account. He then had random music which is so not cool to have showing on his profile and got told off by him! Well if he was clever enough he would have logged out! Sorry, having a rant.'
And this from another: 'I personally hate this song and wish Avril Lavigne would hurry up and decide if she's a goth, a sk8r or a Paris Hilton wannabe! Oh yeah, and addictive doesn't rhyme with delicious!' (If she can rhyme ‘whatever’ with ‘better’, why not? Look at Byron’s ‘Don Juan’ if you really want to see some deliberately off-beat rhymes!!)
Sorry if all this sounds too trivial as we approach exams, but I do think this could be useful for language and representation (the grungy girl subverts gender stereotypes…or does she?); language change (following on from Dan’s recent fascinating post about the history of ‘whatever’; then there's all that usage of 'like', number homophones, shared cultural references, etc.). So academic rigour is sustained, and teacher’s cool credentials … probably shot. Ms Lavigne, sk8r or Paris Hilton, does seem to be going down the ‘Hey Mickey’ pop stream (or is that ‘drain’??)
By Anonymous at April 18, 2007

Top tips for AS and A2

It's about that time of year when students ask for revision help, so here's a list of all the top tips we've put together for both AS and A2 exams. Some of these we've put together ourselves, while others are links to other people's sites and blogs, but the toppest tip of all though, is do some revision now and keep doing it consistently up until the exam: don't leave it all 'til the last minute.

A good tip for revision of basic (and not so basic) grammar is this brilliant, teach & test yourself site at UCL. It takes you from the basics of word classes like nouns and verbs into more complicated areas such as clauses, tense and aspect, and the passive voice. It's great.

And remember, for lots of other wider reading and different angles on the main topics, try typing in phrases like "powerless language", "racist language", "male female conversation" & "CLA" to get links to other articles and posts. Referring to some of the ideas and researchers in these posts, or building their approaches into your own angle on the topic could mean all the difference between an A and a B. Or a B and a C, or a ... you get get the general idea.

Email ThisBlogThis!Share to TwitterShare to FacebookShare to Pinterest
Labels: revision

The changing face of "whatever" 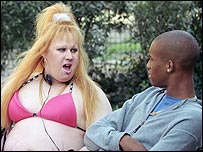 We all know what it means now; even our parents use it and a man older than me (!) used it – apparently unironically - to his young son in the Ikea queue this morning. It's whatever and it's making teachers angry. At least, it’s making teachers in the ATL union angry at their Easter conference.

A survey of 400 teachers found that the "Wha'ever" and "Am I bovvered?" phrases, from the Catherine Tate Show, were the most used in the classroom - ahead of catchphrases from the Simpsons and Little Britain. The sulky adolescent retort of "Am I bovvered?" was recently demonstrated by the Prime Minister Tony Blair, in a comedy sketch recorded for Comic Relief. Teachers were concerned that copying the language and attitude of television characters could have a damaging impact on classroom behaviour.

Like so many slang expressions - greazy, moist, shank or even that old classic brap brap - whatever has morphed its meanings during its 30 (ish) year existence. This article on the BBC website's magazine traces its meanings from 1960 counter culture slang, through the valley girls of 70s and 80s America, Jerry Springer's working class audiences and into British streets and the mouth of the delightful Vicky Pollard.

1973: Meaning "that's what I meant", Secretary of Defense briefing paper for returning POWs

But like lots of other expressions that move from the streets to mainstream usage, whatever is probably doomed to go the same way as bling, losing its cutting edge in the mouths of old folks, Trinny and Susannah yuppie clones, and wannabe trendy English teachers. But then again, cool has always been cool, and some other slang terms remain in circulation for a long time. It all depends on what it sounds like, how it's used and who uses it. And so long as it winds teachers up, it's probably still got currency for a while.

"It's used as a punctuating term, the answer to everything," says Ralph Surman, a deputy head teacher at a primary school in Nottingham and a member of a government task force on school behaviour. "It's like a toddler saying 'no'. They don't mean 'no' but say it to everything because it feels nice. The syntax feels nice on the teeth and the tongue."

More coverage of accent change in the UK linked to the excellent British Library website - worth looking here and here.