Gestures point to a baby's success 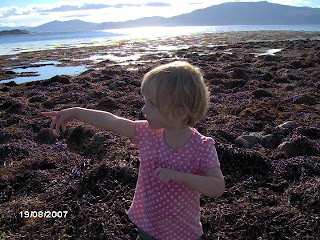 Research from the University of Chicago reported here and here suggests that parents who use gesture with their children in the early stages of language development are more likely to see their kids grow up to have higher productive vocabularies and be better prepared for school.

As you'll probably have looked at with interactional theories of language development - Jerome Bruner, Catherine Snow et al. - there's a belief on the part of many child language experts that parents and caregivers can use body language and gesture to help children develop their language skills.

Meredith Rowe and Susan Goldin-Meadow, from the University of Chicago, worked with 50 young families from different socio-economic backgrounds to investigate why some toddlers seemed to grasp language more quickly than others.

They filmed 14-month-old children during an hour and a half of play with their parents and noted down the words and gestures that were used. Later, when the children were aged four and a half, they were given a vocabulary test to assess their language skills.

They go on to add, "By learning to gesture, toddlers pick up new words more quickly because it prompts parents to name the object the gesture is directed at. For example, if a child points at a doll, the parent might repeat the word "doll" a few times, boosting the child's chances of remembering the word".

But is it as simple as that? Socio-economic status is very important in this study and it's pretty clear that children from higher income backgrounds tend to have more communication and interaction with their parents (...he says while tapping at a keyboard ignoring his 3 kids who are watching TV or playing on a DS...) as this 2004 Guardian article by Polly Toynbee points out in its reference to research by Hart and Risley into social class and language.

I'm sure the researchers will have looked at this issue and I'm probably missing something obvious, but from the reports printed here I can't see any reason to think that gesture has that much to do with anything: just because a child from a higher income family uses more gesture at 14 months and then goes on to have a higher productive vocabulary at 54 months, doesn't necessarily mean that any improvement is down to gesture. Surely the socio-economic status of the child is what is really influencing the leap? And while there's clearly a case for arguing that gesture can help improve children's language development, is it really more important than the child's opportunities for communication, the level of interaction they receive from parents and the environment the child grows up in? I'm not so sure...
By Dan at February 19, 2009