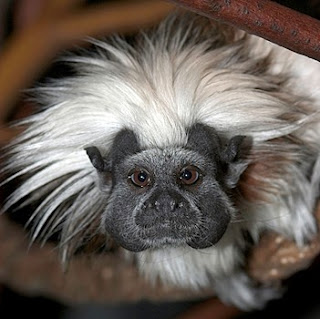 And following hot on the heels of the last post about research into child language and how it seems to support interactional theories of development, here's research on monkeys that seems to offer support to nativist theories. According to the BBC news website and New Scientist (quoted here) by playing repeated patterns of two syllable "words" to monkeys on one day and then mixing up the patterns on the second day, it could be observed that the monkeys were alert to differences in syllables:

The findings do not mean primates can communicate using language, but they do suggest that some of the skills required to use language may be linked to very basic memory functions.

One grammatical structure that is found across many languages is affixation: the addition of syllables, either at the beginning or at the end of a word, to modify its meaning.

For instance, in English, the suffix "–ed" is added to verbs to make the past tense. In German, the same effect is achieved by adding the prefix "ge–" to the front of verb stems.

What this doesn't "prove" (and to be fair, no one is claiming that it does) is that grammar is inbuilt. What it does seem to support is that some sort of learning process - which involves language in some form - is present is monkeys, our evolutionary relatives and that this process can be extended to "rules" of human languages.
By Dan at July 08, 2009