Texting: the work of Satan himself 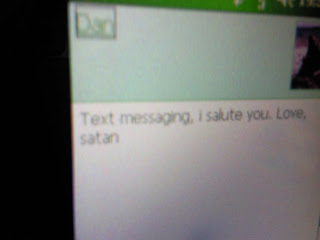 According to an article in last week's Times, texting is not only making teens' vocabulary shrink to an almost caveman-like 800 words a day but it's also making them unemployable. The article quotes research commissioned by the government which states that teenagers "are avoiding using a broad vocabulary and complex words in favour of the abbreviated “teenspeak” of text messages, social networking sites and internet chat rooms". So, it's not just texting then , but all computer-mediated communication that's to blame.

It's another moral panic which stokes the public's fears about a new generation of illiterate imbeciles being spawned by feckless parents and incompetent teachers. And do u no wot? It's rubbish. But at least it's exactly the kind of article you can use in preparation for the Language Discourses part of ENGA3 and this article even manages to quote a proper linguist, the ubiquitous (look it up and improve your meagre vocabulary if you don't know what this word means) David Crystal:

David Crystal, honorary professor of linguistics at Bangor University in Wales, said many experts underestimate the breadth and complexity of a teenager’s vocabulary. “The real issue here is that people object to kids having a good vocabulary for hip-hop and not for politics. They have an articulate vocabulary for the kind of things they want to talk about,” he said. “Few academics get anywhere near measuring that vocabulary.”

An encouraging aspect of an otherwise scaremongering article is the mention of the government 's Communication Czar, Jean Gross, and her plan to get teenagers to record language being used in workplaces and for them to study what they record. Sounds to me like what we've been doing very successfully for the last 10 years with English Language A level...