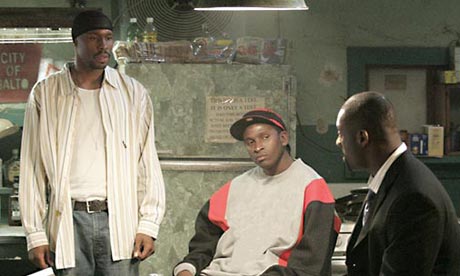 Here's a job that will appeal to the many fans of The Wire that have sprouted up in south London since we forced all A level students to watch it in class. The US Drug Enforcement Agency has advertised for speakers of "Ebonics" to sign up as translators in an attempt to decipher the language of African American drug dealers. But don't worry. They're not assuming it's only African Americans who are selling drugs: they're also recruiting Ibo, Berber and Farsi speakers, as well as lots of Spanish speakers, obviously.

The Guardian article covering this story makes some interesting points about what this tells us about attitudes to African American speech:

Ebonics is described by some linguists as English incorporating the grammar of African languages, but as it also includes many words invented on the streets, it is dismissed by others as mere slang.

Nonetheless, the administration is confused enough to ask firms providing translation services to provide the nine Ebonics translators to cover an area from Washington DC to New Orleans and Miami and even the Caribbean.

The move is a contentious one. American officials have in the past denied that there is any such thing at Ebonics.

There's more on Ebonics here if you're interested. Meanwhile, I am busy writing my letter of resignation (this is becoming a habit) and sending an application to Baltimore. Aight?
By Dan at August 25, 2010