If you're thinking ahead to Paper 2 at the end of the week and wondering about potential case studies to use for the language change question or even for debates about language for Section B, gammon might be a good place to look. It's one of those words that's been around for a while with one main meaning (a kind of smoked ham) but it's recently developed a newer and more controversial meaning that's been used online and debated in various newspapers by some of the most high profile columnists and sharpest minds of our generation (and Brendan O'Neill from the appalling Spiked Online). It's a neat example of semantic change, polysemy and debates about the potential of language to cause offence. It also ties in quite nicely with the sample paper on 'literally' and attitudes to language change.

'Gammon' has meant other things too and you can find definitions that relate to the police (presumably a link to the pejorative slang terms 'pigs'), to telling lies (probably because of the link to Cockney rhyming slang and 'porkie pies' for 'lies') and a few that are a bit rude about women's body parts that I won't repeat here, as this is a family publication.

So what does this new type of 'gammon' mean? It first appeared on Twitter in 2016 in association with David Cameron, whose face was on occasion described as resembling a boiled ham (and after *that* story about Cameron and a pig's head had been circulated, it took on a slightly more disturbing tinge). But it was in 2017 that it really took off when it was used to describe a post-Brexit vote phenomenon that many had observed but few had been able to nail so accurately: namely, a certain type of man whose anger about the modern world had made them turn the colour of ham or what Urban Dictionary's (now mysteriously removed) top definition describes as "a particular type of Brexit-voting, middle-aged white male, whose meat-faced complexion suggests they are perilously close to a stroke".

You might have seen the "wall of gammon" assembled from the faces of Question Time audience members judged to fit the criteria. 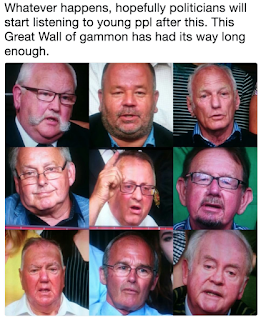 So far so good. You might argue that there's a clear resemblance to a smoked ham product in all those faces and if they're ranting about "Brexit meaning Brexit", immigration and/or EU fishing quotas, then - as the saying goes - if the caps fits... On the other hand, if that's you, your dad or your Uncle Barry, it might not go down so well.

But wait: aren't these all white men? And doesn't that mean that 'gammon' therefore must be a racial slur? That was certainly the argument put forward by the DUP MP Emma Little-Pengelly who claimed that 'gammon' was a term 'based on skin colour and age' and therefore a slur that should not be used. You can read more about it here and about the subsequent debate over the term.

Use of the term has spiked in the last few weeks. And while the original meaning of gammon seems to have been on the decline since its peak in around 1820 as the Google n-gram below shows, its more recent meaning has spread far and wide.

The number of searches for 'gammon' as an insult or 'gammon' as slang can be tracked through Google Trends and they show a spike in 2018.

gammon as slang (via Google Trends)

gammon as an insult (via Google Trends)

So, have we reached peak gammon? Probably, if these charts are anything to go by. And that's an interesting case study in itself, because tracing the spread of a new slang term, or an old word that's been given a new meaning, is a fascinating way of looking at what language is and how it works.

But what about the wider debate about gammon as an insult? Is it - as several have claimed - a racist slur? Is it (sharp intake of breath) as bad as the n-word? This tweeter thinks not and I'd tend to agree with him. 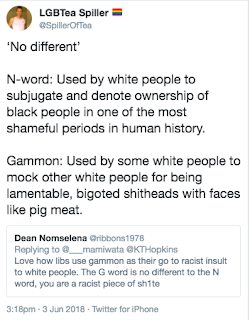 But that's Twitter and people are often very rude on Twitter. I try to stay off it these days (and fail most of the time). What about other commentators? And what about the wider language debate about what constitutes a slur? One accusation is that gammon has been used by left-wingers to attack their political opponents when reasoned argument fails. It sits alongside centrist dad and melt as terms that left-wingers use to abuse those to their right and perhaps equates with the kind of jibes that right-wingers have been chucking at the left for even longer: snowflake and remaintard, for example. Matt Zarb-Cousin is one such left-winger and he argues in Huck magazine that it can't be racist as it's directed at a group of people who choose to behave in a certain way.

It isn’t racist to say someone looks like gammon, as while there are striking aesthetic resemblances across the gammon constituency, gammon isn’t a race, it’s a lifestyle choice driven by warm ale. It’s a state of mind, driven in no small part by a regular spoon feeding from the trashy tabloids.


On the other hand, Lucy Fisher in The Times argues a different line:

Whether or not the trope is a statement about race, it is obviously a statement about culture and class. Gammons are backward, provincial embarrassments. They may be unskilled workers or small business owners or wealthy aristocrats. If that sounds a confused mix, it’s because the term has already met the fate of most political insults: stretched beyond coherence to encompass as many people as possible who vote the “wrong” way and hold the “wrong” views.

No debate about politics would be complete without Owen Jones of The Guardian getting a word in.

Gammon is a racist slur, we are told. Let me put this gently: affluent white men with reactionary opinions are not a race. White people mocking other white people over their skin colour is not racism. Inherent in the term is how a certain type of golf-club bore can go somewhere between a shade of pink and crimson red as they froth about gays having more rights than them these days, and only Jacob Rees-Mogg can be trusted to deal with the remoaners and leftie terrorist supporters. It is a term about political views and how they are expressed.

And others have gone on about it too. Gamm-on and on, in fact.

And many many more...

The debate for Language Discourses is an interesting one, I think because we can all argue about the offensiveness of terms that we think might be applied to different people, but to my mind 'gammon' is hardly in the same league as racial slurs. It might have an element of classism to it - although I'd contend that it's used to describe the wealthy as well as the working class - and it might be childish, but that's not a crime.

Is there a double-standard at work here too? We often hear complaints from the right that Political Correctness means "you can't say anything any more", but it's now the right who are complaining about a term that's used to describe them. Meanwhile, some on the left have long complained about the coarsening of public discourse and the need for sensitivity in language, but shouting "Button it you brexit gammon!" is hardly likely to add nuance to the discussion.

But what it does show - and I think this is brilliant - is that language is at the heart of so many of the debates around us. Whatever you think of the term (and obviously, I like it) it shows that language is a subject for debate; it's worth discussing and analysing because it's relevant to our daily lives. That's great for you if you are an A level English Language student or teacher because it gives you so much to write about and think about for Paper 2.

So on that positive note about what an ace subject English Language is (and I genuinely hope that despite all the hard work - maybe even because of it - you've found things to enjoy and interest you on the course), I'll wish you the best of luck for Wednesday's Paper 1 and Friday's Paper 2.