Could you recognise an East Midlands accent?

In this guest post, Natalie Braber (@NatalieBraber) takes a look at a variety of English that sits somewhere in the middle of the North/South divide and a little to the east of its better known Brummie cousin. Natalie is Associate Professor of Linguistics at Nottingham Trent University and an expert on the accents and dialects of the East Midlands.

When we think about accents in the UK, there are some which we all think of straight away, for example, Scottish and Irish but also more local places such as Newcastle, London or Liverpool. But not all varieties have the same media exposure and this can make them harder to recognise, even for people who live there.

My research examines language variation in the East Midlands which I think is a really interesting area of study. When linguists (and other people too!) think about the way people speak in the UK, they often think about the North/South divide and how that is reflected in language. For example, do you pronounce ‘bath’ with a long or short /a/? And do you pronounce ‘up’ as /ʌp/ or /ʊp/? But this divide is not straightforward – how do areas like the East Midlands fit into this picture? Although the East Midlands is the geographical centre of England, it certainly isn’t perceived as being a central part of England. It has been referred to as ‘neither here nor there’ and as a ‘no-man’s land’. Even the use of the term ‘East Midlands’ can be problematic – different researchers use terms such as ‘south Midlands’, 'North-west Midlands’, ‘Central Midlands’, ‘East-Central Midlands’ or just ‘Midlands’ but without explaining exactly what areas they are discussing.

Until I started work on them over the last few years, there hadn’t been a regional survey of the region since the Survey of English Dialects in the 1950s. However, I think these linguistic varieties are interesting. From its geographical position in England, we can see that these varieties share features with ‘northern’ speakers but there are also some features which are more typically found in ‘southern’ varieties. I wanted to find out more about what young people thought about language variation in the UK and whether they could recognise local accents. So I invited secondary schools from across the East Midlands to take part in my study. I asked permission to attend an hour-long class with students in year 13 in order to engage with their opinions on language variation in the UK and listen to some recorded voices to try to place particular accents.

In all, 327 students were involved in this study (of which 191 in Nottinghamshire, 85 in Derbyshire and 51 in Leicestershire). The first task was to ask these students about the North/South divide in the UK – where they thought it was and whether they felt they belonged to either region. Students used a map of the UK to draw a line where they felt this divide was and wrote next to this whether they thought they were northern, southern or neither. This task showed me that most students (99%) agree that there is such a divide but many did not have an expressed affiliation to either region. Almost a third of all participants left this blank and ‘neither’ was the second choice. Geographical location could play a role, because students from the most southern county in these samples, Leicestershire, were more likely to label themselves as ‘southern’, while those from Nottinghamshire were most likely to label themselves as ‘northern’ and for those who used the term ‘Midlander’ most were from Derbyshire.

In the second task, students were asked to circle areas on the map where they thought distinct linguistic varieties were to be found, to label them with names if possible and to give any opinions they had about these varieties (what it sounded like, typical words or pronunciations, famous people who spoke with such an accent). The responses given by these students were very variable. Some included just one or two circles (e.g. Scottish, Geordie) whereas others drew very detailed analysis of different words used in areas and included many circles covering larger areas of the UK. The top five regions/cities labelled by the participants were Liverpool (by 90% of students); Birmingham (83%); Newcastle (81%), London (77%) and Scotland (62%).


I was also interested in the way students labelled their own areas, and which areas they left blank. Nottingham was recognised in 10th position as a distinctive accent by students in all three counties (although it is important to remember that Nottinghamshire students made up a larger group in this sample). But even the students from Derbyshire and Leicestershire very rarely included their own areas as having an accent. Only eight participants labelled Leicester/Leicestershire as having a distinctive accent (and all of these students were from the schools in Leicestershire) and a further three had labelled Derby/Derbyshire (again all from schools in that county).

So it seems from this task that the East Midlands accent is not seen as being an obvious candidate for showing regional variation. This may be due to the age of the students as they may not be aware of having an accent themselves or it could be to do with the fact that East Midlands voices are not often heard in the media.

In the third task students were asked to listen to 14 different voices and to put a cross on the map where they thought the speaker was from – this included locations from around the UK (including Northern Irish, Scottish and Welsh accents, as well Plymouth, Ashford (Kent), London, Newcastle, Birmingham, Burnley, Withernsea (East Yorkshire) and Liverpool and three ‘local’ dialects (Nottingham, Leicester and Derby). I was particularly interested in how well the students were able to recognise the ‘local’ voices. The results show that it seems that the dialects commonly named in the previous task were also accurately labelled in this task (particularly Liverpool, Newcastle, Birmingham and Wales). London, Glasgow and Northern Ireland as well as the local dialects were generally labelled less accurately. Previous research suggests that people tend to be better at recognising local accents. However, our participants were not very accurate at recognising the voices which were from the East Midlands and placed them all around the country, with locations being placed as far north as Manchester and Leeds, and as far south as Plymouth and London. 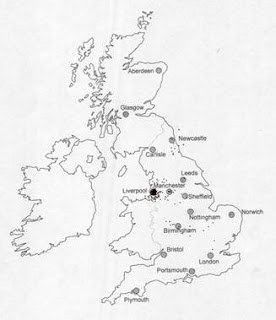 From this task we can see that some accents may be harder to recognise for these participants and local varieties are included in this. I did include discussion about local language with the participants and they were able to think of lots of different features to do with pronunciation, grammar and local words which they thought were ‘typical’ of the East Midlands. When we talked about local language, much of the discussion focused on its perceived ugliness. Students mentioned that it was lazy, slurred, chavvy, boring, rough, not proper, nothing unique, and some said that they did not like it or were trying to get rid of it. Only one or two students said that it was relatively easy to understand and one student that it was friendly. This raises questions about why there should be so much negativity surrounding local language. Even so, these participants were still not accurate in recognising these accents. It could be that the East Midlands is not immediately thought of as having a distinctive accent because there are no strong links with local famous people. For many of the other accents we could see that celebrities from a region may help with recognition.

I think more work is still needed – would older participants hold the same views? How good would people outside the East Midlands be at recognising or describing East Midlands voices? There are plenty of other varieties in the UK where this still needs to be done – why don’t you collect some data where you live and examine how it differs from other varieties? You could include pronunciation, morpho-syntactic structures or lexical variation. I think it is important to celebrate our own local accents and dialects – they are an important part of our identity and we should be proud to use them!

You can read more about Natalie Braber's work on East Midlands English, including 'pit talk', the language of East Midlands miners, here and East Midlands Voices here.
By Dan at October 31, 2019