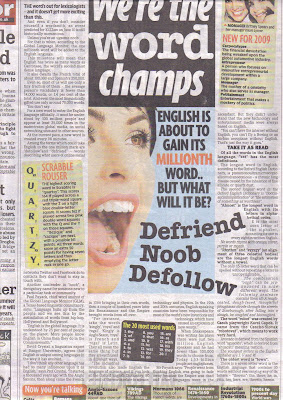 Today's Daily Mirror has a page dedicated to the English language and the story from the Global Language Monitor about English approaching its millionth word. According to the site today, the English language will reach its millionth word on June 10th. How they work this out, I'm not sure, and it's clear that proper, qualified linguists are sceptical too. Language Log calls it the "million word hoax" and criticises it as a publicity stunt to promote a book by Paul Payack the boss of GLM.

Whatever the pros and cons of the claim about a million words, the article in The Mirror gives a neat, potted account of the development of English and quotes language guru (and future SFX speaker) David Crystal which is always a good thing. It also mentions lots of new words that have entered the language through social networking, online games and gloomy economic conditions, so it's a very handy article to refer to if you want some examples for your language change essays on ENA5.

It's also got lots of fascinating language facts such as the most commonly used words in English, the longest words without vowels and much much more!
By Dan at May 08, 2009