If you are an English Language student, you are probably being reminded all the time that English is a vibrant, living, constantly evolving force that is always being discussed and debated. And that’s not just your English teacher loving their work and getting tripped out on linguistics: it’s true, dammit.

Stories about language are featured every day in various news outlets and – unlike in my early days of teaching this course – you don’t need to keep yellowing cuttings from newspapers in a folder, you can go on teh interwebz and save them for future reference or just share them via social media with other language nerds.

Sometimes though, the sheer volume of language stories is a bit much to cope with. “Where does it all fit in to what I’m studying?”, “What does this even mean?” and “Why is that pigeon staring at me?” might all be questions you ask yourself as you scan the stories. And I’d like to help you with two of those questions in the next few posts on EngLangBlog.

What I’m hoping to do is take a few recent news stories about language and see what uses we can put them to. Some of them are just interesting stories about words, some are darker and more politically tinged (Don’t blame me: we’re living in dark times.) and others shed a bit of light on new ways of thinking about an aspect of the course. I used to do this quite a lot on the blog, back in the days before Twitter but gradually social media took over and became the more effective way of sharing such stories, but sometimes at the expense of a slightly more detailed and developed coverage of the story.

Anyway, here's the first one, and others will (I hope…I plan, anyway…) follow in the next few posts.

While the English language is a rich and resourceful tool for expressing humanity’s many and complex needs and wants, it’s also great for slagging off people and calling them names. And ‘boomer’ is one of the latest terms to gain prominence.

According to the Merriam Webster dictionary, ‘boomer’ is short for ‘baby boomer’: “a person born in a time when there is a marked increase in population; the word is especially used to describe people born in the U.S. between 1946 and 1964. It has been in use since the early 1960s”.

So, it’s not a new word at all, but one that has been around for a while. If that’s the case, why is it now being used and argued about? Well, it’s the way it’s being used now by younger people (anyone not born between 1946 and 1964), be they millennials, Generation X or Gen Z-ers, to cast Baby Boomers as out-of-touch, easily duped, technologically-naïve, climate destroying, Trump/Brexit-voting, over-privileged idiots that seems to be the clincher. And its appearance in a kind of reflexive, stock retort of "OK Boomer" from young to old seems to have been the catalyst for its recent upsurge. You can read more on the OK Boomer meme here.

In fact, one tweet – ridiculously - likened it to the n-word. The comparison would be laughable had it not been offered so seriously (apparently, according to another source, by a man who had previous for using racial slurs that got him into trouble as a radio presenter). Dictionary.com thought it was a stupid tweet, anyway. 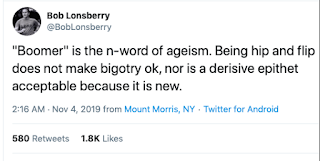 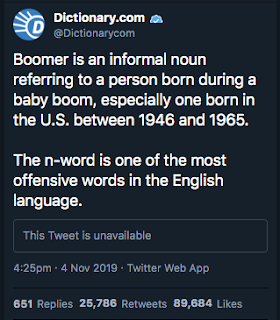 What does ‘boomer’ offer for discussion in the A level? I’d argue that it fits into two of the main areas of the course quite neatly, the first being ‘meanings and representations’. As part of your study of texts you’ll look at what words mean and how they are used, so thinking about the intention behind using certain terms is really important, and thinking about what words mean to different people runs alongside this. There’s nothing necessarily bad about the word ‘boomer’ – it’s been used as a fairly neutral label for well over 50 years with no overt ill-will apparent in many of its uses – so perhaps it’s the sense that now it’s being used by one group against another (or more accurately, I suppose, most other groups – including my own Generation X-ers – against a particular age group) that makes it seem worse now. Perhaps time has changed its meaning.

We’re living in a time, you might argue, that could have been very different had the boomers behaved differently and shown some awareness of the impact of their actions on their children and the rest of the planet. Cheap air travel, booming (LOL) property prices meaning that very few young people can afford to buy their own homes and fetishizing gas-guzzling cars all seem to be a feature of the baby boomer generation. So why shouldn’t we blame them? 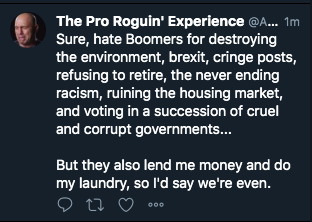 Well, let’s have a think why there was a boom that they were part of. The Second World War ended in 1945 so the baby boomers were spawned in the aftermath of a truly global catastrophe that sent millions of people to their graves in a way that just hadn’t been seen before. Having just come out of that, isn’t there perhaps a slight excuse for wanting to live a different life to your parents’ generation? It doesn’t really excuse what many of them went on to do, but you might see a context for their actions.

And of course, the other thing is that all these labels are completely crass generalisations. As we all know, not everyone born in the same year is going to exhibit the same personality traits or behaviours. We are all individuals with different forces motivating us and different factors influencing us. And that’s where this is relevant to another part of the course: language diversity, and more specifically how language represents different groups. Using any label to categorise a group is bound to be problematic, but we do it all the time. What we need to be careful about is how these labels represent those being labelled.

One of the dynamics you might have studied when looking at how language represents social groups is how much relative power there is between labeller and labelled. Historically - and perhaps a little simplistically for the space we have here -  the power dynamic between white and black, man and woman, straight and gay has been skewed towards the former of each pair (white, male and/or straight). This has often meant that the terms used to label the latter (black, female and/or gay) have been decided by the more powerful groups and have carried more power when used against the less powerful groups. If you take a look at the n-word and other racial terms, and 'slut' and 'faggot' as examples, they have often been powerful terms of abuse, not because of any inherent power in the word but the distance from which it's dropped.

When I used to teach this part of the course I used to compare it to someone chucking a stone from a tower block. It's going to hurt whoever it hits, but the higher you are when you chuck it, the more it's going to hurt. And that's why these terms have become so taboo, as we've seen the power balance shift and those who have previously been labelled gain more power in society and more say in the terms used around and about them.

Which is a roundabout way of saying that I think that 'gammon' and 'boomer' are nothing like the racist, sexist and homophobic terms that they are sometimes compared to. If anything, the sting created from using these words against generally much more powerful and privileged groups, is the sting of surprise. They're shocked - shocked, I tell you - at being the victim of such cruel words when they've been the ones dishing out the abuse for decades previously.