While marking my students' recent work for the directed writing task on Paper 2 of the new spec, I've been jotting down a few ideas about how to address the main areas that need improvement. Apart from some of the stuff I've blogged about recently - making the opinion pieces accessible to non-specialist readers, including enough language knowledge to hit the higher levels of AO2 and developing effective openings and conclusions - one thing that has struck me is this part of the mark scheme for AO2:

Under the 'Performance Characteristics' heading (i.e. the general expectations of what students will be doing to be in this Level, rather than the more specific 'Indicative Content' for each paper), the key thing seems to be the notion of identifying different views, approaches and interpretations.

If we assume that students already need to have "show detailed knowledge of linguistic ideas, concepts and research" (Level 3), then what Level 4 seems to be asking for is a sense of alternative ways of looking at the issue and an awareness that other views exist. In an opinion piece, there is clearly an argument that needs to be developed and the Directed Writing Guidance document on the AQA site makes it clear that "students’ writing will necessarily have the purpose of conveying opinions and arguing a case" while "marshalling points and presenting them in a coherent form". But, perhaps most importantly for Levels 4 and 5, "Students can show that they can deconstruct others’ arguments and present their own".

My reading of this is that a single-track opinion piece which ploughs a fairly narrow furrow and doesn't look up, or around, at alternative arguments or opinions, might find it hard to go much higher than Level 3. I might be wrong... and we probably need to remember that the paper hasn't been marked (or even sat) yet.

Anyway, from looking at my own students' work, I've decided that they need to do a bit more work on addressing different opinions and showing awareness (at least), understanding (preferably) and evaluation (optimistically) of other views.

Style models are good for this and some of these are useful for showing how different opinions can be flagged up and then knocked down. David Crystal does a good job of this in his review of Simon Heffer's (awful) Strictly English:

Heffer hides his tastes behind the idea of what is logical, using variants of the word more often than Spock. "Rules in language are made by logic, not by a democratic vote," he writes. If only that were true: it would save grammarians so much bother. In fact, there is no logic behind his recommendations, other than the usual kind favoured by pedants: if I like it, it's logical; if I don't, it isn't.


By quoting Heffer, Crystal can respond directly to the argument, but perhaps remembering a quotation and then deploying it effectively is a bit of a tall order for an AS student in an exam (although, it's always nice to see it happen).

An alternative approach is a little vaguer, but quite effective in its own way. Lindsay Johns' Ghetto Grammar article, which is a favourite of mine for class analysis, takes a lighter touch:

Some educators take a position of cultural relativism. They assert the legitimacy and value of street talk, or at the very least, the importance of teaching young people to "code switch" - how to differentiate in which milieu it is socially acceptable.


I have no time for such an approach. In my experience, young people find it very hard to code switch. Text-speak, poor grammar and street patois routinely pervade the essays I set them, let alone their conversations with me.


What's interesting about this approach is that it's a bit vague about:
a) who the "educators" are (names would help);
b) how what they say can be defined as "cultural relativism";
c) why Johns' own "experience" should trump these educators' assertions.

On the plus side, it's effective in keeping his (for me, almost entirely wrong-headed) argument on track.

A quick task I'm setting my students after Easter is the one below, in which they look at an idea from one side of a debate (in this case, work we've been doing on dialect and slang bans in schools) and then try to come up with a counter-argument. I'm going to encourage the students to come up with a source, quotation or reference point for each argument too, so they can draw on what they've studied in class and support their views, where possible. I'd be interested to see if anyone else has ideas for different arguments that could be brought in or where else to take this. 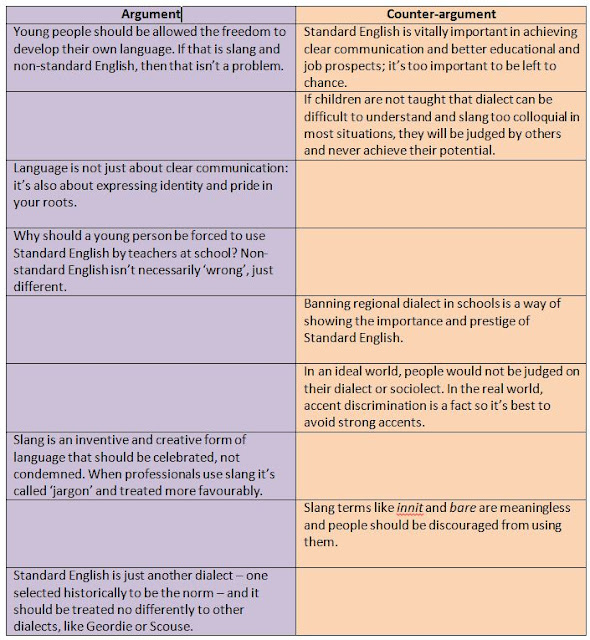