I don't normally blog opinion pieces on here but thought I'd share this one as I was asked to write a few things for the TEFL Workers' Union (here on Twitter and here on Facebook) on language discrimination. (And A level students might find it a useful model to look at/critique!)
Accent bias is real and affects people in tangible social and economic ways. Worst affected – according to the research – are those from working class and/or racialized minorities, as well as younger people starting off at university and in the workplace.

For many people, the accent norm is seen as a southern, often RP, voice, but the reality is that the majority of people in the UK don’t have those kinds of accent. ‘Regional’ accents associated with industrial cities are often among the most stigmatized.

Accent bias is about more than just a few jokes and hurt feelings: it’s about making people feel they are not good enough, making them feel like they need to change to ‘fit in’, and about overlooking people’s potential, expertise and intelligence, all because of lazy stereotypes.

The problem is obviously widespread & structural too. Attitudes to accent are often more about attitudes to social groups, so the language is often just an index of that. Interviews we’ve done on the Lexis podcast with language experts like Devyani Sharma, Amanda Cole and Lauren White all show this.
Educators have an important role to play in fighting back against accent bias and all it entails. We can’t argue for equality of opportunity on one hand and uphold reactionary and discriminatory language attitudes on the other. It’s incumbent on all of us working in education to challenge this inequality.

While it’s usually good news for language educators to see issues about language prejudice getting an airing in the media, it also tends to show the gulf between what linguists think about language and what the general public thinks.

Last week, various newspapers and online outlets ran stories on the publication of a report from The Sutton Trust about accent bias in the UK. The report featured work from linguists on the Accent Bias Britain project at QMUL.

The findings made pretty grim reading: 30% of university students and 25% of professionals in workplaces said their accents had been mocked, while similar percentages felt self-conscious about their accent.

There was also a pattern of accents belonging to racialized minorities and people from working class backgrounds reporting more mockery of their varieties, leading to some people feeling a stronger need to change their accent to fit in.

Tellingly, even when responding using exactly the same words, accents indexed as working class and/or minority ethnic were rated as lower for professional expertise and competence. Of course, who these lower ratings came from were interesting too… mostly southern and upper class people.

None of this is particularly new: accent bias studies have been conducted for the best part of 50 years (and the Accent Bias Britain site is excellent for mapping and summarizing these studies) and the accent hierarchy of the UK seems deeply entrenched, along class, ethnic and regional lines.

What then can linguists and the wider education community do to challenge this? There are positive noises from the project about making people aware that accent bias exists and to be conscious of it, and that seems to have an effect on responses straight away in professional settings.

The comments that followed many of these news articles give us an insight into what we’re up against. One tweeter offered the cry laugh emoji at the end of their deeply empathetic reply:  “Do you need to ask why anyone ‘would want’ to lose a brummie accent?”.

Others variously saw the report as some form of ‘wokeness’ (yawn) or an appalling lack of ‘resilience’ on the part of the respondents. ‘Get over it’, ‘deal with it’ and ‘it never did me any harm’ seemed to be the order of the day for many others, with reactionary narratives the norm.

The ‘it never did me any harm’ response is perhaps one of the laziest of all and brings to mind other favourites of the reactionary boomer - smacking, power cuts or even world wars (fought before they were born) among them - as things we should just get over without complaint.

What’s so lazy about this is the self-assurance that just because the person thinks it’s never done them any harm that no harm has been done. What about those opportunities you were never aware of because you’d been written off as unsuitable the moment you opened your mouth?

When presented with research like this showing that accent prejudice is rife and has real world consequences - denial of opportunity and equal opportunities for large parts of the population – we’ve really got to do better than writing it off as the hurt feelings of woke Gen Z snowflakes.

Language bias and discrimination is an issue that is at the heart of a lot of work that language educators get involved in education to fight against – often because we come from backgrounds that bear the brunt of these prejudices but also because it’s about fairness and equality. And kicking back against reactionary narratives around accent bias, challenging prevailing popular discourses and offering a critical and socially just response is something that I think is incumbent on us all to offer.
By Dan at November 24, 2022

As I posted a day or two back, accent attitudes have been back in the news. Following a report from The Sutton Trust, using research from the team behind Accent Bias Britain, various newspapers and online sources decided to cover the broad findings of the report and discuss attitudes to UK regional accents and those associated with people from working class and/or racially minoritised backgrounds.

Accent stories are pretty popular in the press and we’ve seen a lot of coverage of them in the last year or two. Whether it was the attacks on TV presenter and footballer Alex Scott for her pronunciation of -ing, BBC presenter Amol Rajan’s appeal for a wider variety of accents at the BBC or Artificial Intelligence being used to make call centre workers sound ‘whiter’, accents get you clicks. And in the (anti) social media hellscape (thanks Elon) that we’re heading into in 2022, a lot of those clicks are hateclicks.

While the stories and op-eds are pretty good sources for A Level students to analyse and evaluate and even use as style models, the replies and online comments are more visceral… and sometimes pretty vile. But having said that, they are useful short texts to pull apart in class, so here are a few ideas for what to do with them.

1. Assemble a cline of contempt: take each tweet/reply/comment and copy it onto a grid where you can cut them out and line them up. Rank them in order of their negativity to the linguistic position being discussed. Is this one more negative about certain accents than this one? How can we tell? Are they equally awful but just focusing on different things?

2. Group them into patterns of peevery: what are the themes behind their complaints? Are they annoyed at the absolute wokeness of a linguist even arguing that there such a thing as accent bias, or just annoyed that young people are being sensitive about accents? Group them into shared themes and discuss what these concerns might tell us about these language discourses.

3. Analyse them for discourses of doom: blow up each message onto a sheet of A4 and pull them apart linguistically, annotating them and using your three AOs for P2Q3 as a guide. AO3 for meanings and what is being represented, along with the discourses being tapped into and reproduced; AO1 for linguistic descriptions of the techniques and structures being used; AO4 for connections between these texts and the wider discourses you have identified in previous lessons, and perhaps even connections to the other texts as your analysis develops. Maybe you could even start to write comparative analytical paragraphs on two or more messages.

4. Answer back: choose a couple of texts that you can respond to and use this as practice for your P2Q4 work (where you write an opinion piece in response to the issues raised in the texts from P2Q3). Write back to the message. Perhaps you could discipline yourself to just sticking to the length of a tweet or a couple of sentences; perhaps you could develop this into a couple of paragraphs. Think too of how you can show your AO2 knowledge to challenge uninformed and prescriptive views of language. If you see a message that you think is actually right about something but not very well-supported, think about how you can develop a more linguistically informed way of phrasing it, by referencing research, theory and examples from case studies.

Here are a few anonymised responses to the accent stories that you might want to use. 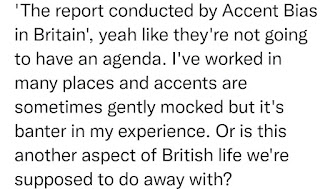 And of course, before social media existed, we had letters to the editor (ask your gran) and some of these were nicely crafted. You still find them in the wild occasionally, like here in The Guardian. So these could be mixed in too to spread the range and offer some more rhyme and reason.

Accent bias in the media

It's been a while, sorry! Most of the posts I used to add here seemed simpler to do as tweets, linking to news stories, but I might start blogging more regularly again as Twitter seems to be taking a turn for the worse.

Anyway, here's a load of stories and links connected to a recent report from The Sutton Trust and using research by Accent Bias Britain into... well, accent bias, as you might expect. The Sutton Trust tweeted about it here as well.

I might come back to the comments and replies another time and we'll probably address some of this in a future episode of Lexis.

And an unconnected accent piece from a day or two back: James Bond