The University of Salford is hosting a workshop for English Language teachers in April. Organised by Sue Fox and Heike Pichler, it looks like covering a range of really interesting material for teachers who are keen to keep up with recent developments in spoken language analysis and digital corpora.

More details can be found here, and Jenny Cheshire and Sue Fox's Linguistics Research Digest, which runs regular updates about recent linguistic research, can be found here.
By Dan at January 23, 2012

Knowing your leet from your pwned

This link has a look at some internet jargon and helps explain the origins of some of the language on the net. If you're studying Language Change or Language and Technology it should be handy.
By Dan at January 23, 2012

Your English Language teacher may well be a snappy dresser, a master of wit, or a pedagogical dynamo who brings light to your otherwise darkened life (Business Studies, Accounting and PE A levels in other words), but does he or she have a beard like David Crystal? She does? Cripes... 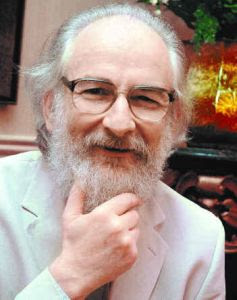 Professor David Crystal is one of the biggest cheeses in the world of linguistics and he's speaking at March's emagazine English Language conference in London. To get a taste of the range of his knowledge (and frankly his bare skillage) have a look here on the emagazine conference blog where we've posted some links to some of his TV and lecture performances.
By Dan at January 20, 2012

With Language Discourses at the heart of the ENGA3 paper, it's always useful to scour the media to find examples of writers getting themselves worked up about language change or what they see as declining standards. If you've done any work on this topic so far, you'll already know that prescriptivists have always bemoaned changes to the English language but have rarely been successful in stopping its evolution.

And you'll probably already know that most linguists - those who study language - are rarely of a prescriptive mindset. They tend to see their role as describing language, pointing out how it's used and by whom, rather than judging its use as good or bad. That's why we - your English Language teachers - generally tell you to talk about standard and non-standard instead of good or bad. Hark at us telling you what to do: how prescriptive...

This week there are two or three different pieces about changing language and attitudes towards it. Simon Kelner of The Independent writes not one but two articles about things he doesn't like in language: grocer's apostrophes (potatoe's, for example), split infinitives (to prissily prescriptivise, perhaps), Waterstone's dropping its possessive apostrophe, Americanisms, and all the usual suspects. It's a load of old gubbins really and reheats some frankly rather overcooked quibbles about language, most of which get dismissed by proper linguists.

A quick read of Henry Hitchings' The Language Wars or Robert Lane Greene's chapter A Brief History of Sticklers in You Are What You Speak (or better still, a long read of both) will tell you that nearly every prescriptive argument about declining standards can be successfully debunked. There's nothing wrong with splitting infinitives (it's a an old canard based on the misapplication of Latin grammar to English), most of the supposed "Americanisms" moaned about here (for example) are not really from America at all and apostrophes are a recent and rather inconsistent form of punctuation (as David Crystal explains here).

Elsewhere, Sali Tagliamonte, who is a leading light in the field of technology and language, talks some sense about how technologies such as texting create a repertoire for young people to draw upon, rather than necessarily restricting them or dumbing them down. In her interview with the St Catharine Standard, she talks about how young language users switch between language styles depending on their understanding of what's appropriate in a given situation, making the point that "They don't just adapt haphazardly. They adapt systemically".

This is clearly a much more descriptive standpoint and one that is supported by her detailed research in the field, more of which can be found here.You can also watch a clip of Sali Tagliamonte talking about her new book (complete with tinkly electric piano music) here.

The whole prescriptive versus descriptive debate is one that we have covered many times on this blog and one that always has some relevance to the A2 year of the English Language course (be it ENGA3 or ENGB3). If you click on the labels for language discourses and language debates after this post, you can find many of the relevant articles.

The American Dialect Society hosts the biggest, and probably most linguistically-informed, end of year poll for new words, and they opted for Occupy as their Word of the Year. As Ben Zimmer explains in the ADS press release, “It’s a very old word, but over the course of just a few months it took on another life
and moved in new and unexpected directions, thanks to a national and global movement.The movement itself was powered by the word”.

The event was live-tweeted throughout with the WOTY hashtag, and for me # has been the word of the year, even if it isn't really a word. So much of last year's political activism was fuelled by or commented upon as it happened by social media - the occupy movement, the summer riots in the UK, the Arab Spring - that it seems natural to have words and symbols from these fields creeping into our everyday language. It was an uncanny feeling to be sitting in the sunny south of France on holiday reading tweets about some of my favourite bits of London getting destroyed, so Twitter words loomed large in my new words of the year, even though I'm a bit late to catch onto it.

The ADS Word of the Year poll also included some less serious entries, such as assholocracy (rule by obnoxious millionaires, or for those of us in the UK, Tories), humblebrag (an expression of false humility) and amazeballs (a slang term for amazing which appears to be totally unnecessary).

Elsewhere,the ever excellent MacMillan Dictionary blog pulled together other contenders, the Evening Standard ran its own list of new or pimped up words and the OED had squeezed middle as its word of the year (despite it being two words).

And if you're looking to keep up to date with the new words of 2012 you can do no better than Kerry Maxwell's excellent Buzzwords column for MacMillan Dictionary, which is always full of proper linguistic analysis and up to date examples.
By Dan at January 12, 2012

Apostrophe-lovers are up in arms over Waterstones' ...Waterstone's's...the decision of Waterstone's bookshop to remove the apostrophe from its name. In a move that some punctuation purists have likened to the end of the world, Waterstone's (named so because it used to be the firm of one Tim Waterstone, therefore - like Sainsbury's and McDonald's - a possessive apostrophe) have decided to ditch the dinky little punctaution mark.

This article in the Daily Mail gives you more information and offers some hilariously unintentional punctuation errors in its readers' comments after the piece. One interesting angle is that the apostrophe is a useful shibboleth, allowing the (ahem) better-educated to look down upon their inferiors with wry disdain. But what use is the apostrophe? It's a relatively new invention, punctuation-wise, and doesn't conform to its own rules (it's ...its...see I'm confused now), but perhaps still serves a helpful disambiguating role in contractions like I'm and she'll, where the pronunciation of a word might be affected if there were no apostrophe.

We've looked at apostrophes before on this blog (here and here, for a start) and I'm increasingly of the view that they're dying and we should probably just get rid of them once and for all to save confusion. It's a good topic for ENGA3 Language Discourses questions (probably as part of Language Change) and would make a suitable topic for a Language Intervention on ENGA4 too.
By Dan at January 12, 2012

You might find some of the previous posts on this unit helpful if you're doing last-minute revision. Have a look here.
By Dan at January 12, 2012