Some more Language Change work in progress (or decay)...

Following on from the last post about how I'm approaching the topic of Language Change, here's a rough plan of the question I'm setting as a way to build up skills and knowledge for Paper 2 of the A level and a few ideas that one of my A level classes came up with this afternoon. 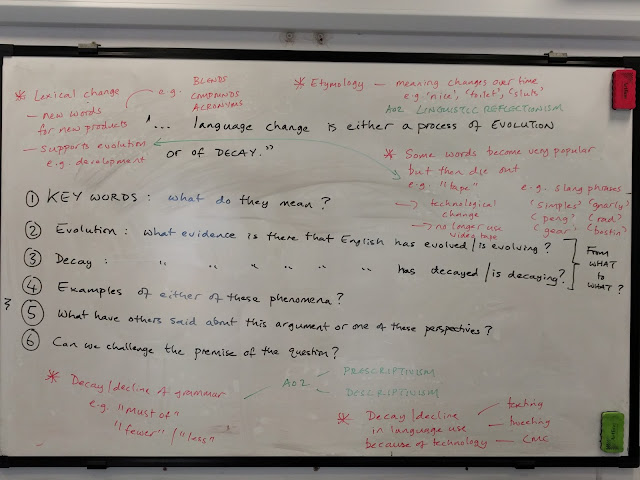 We're heading towards an essay question "Evaluate the idea that language change is either a process of evolution or of decay" and we're trying to build a range of different case studies and examples along the way. As well as that, I'm trying to kill two birds with one stone by looking at some examples of older texts in preparation for Paper 1.

What I'm hoping is that this allows us to do some close work on short texts, thinking about how they use language to convey ideas and represent their subject matter (all part of Paper 1's textual analysis focus) and then the same texts can be sources of examples and evidence for the bigger Paper 2 essay questions. One thing that's different between Paper 2 at AS and A level is the absence of any data prompt with the "Evaluate the idea..." cue, so I think it's important for students to have lots of examples and extracts of data that they can use to illustrate their points.

That's the plan... Any ideas/further suggestions/criticisms welcome.
By Dan at September 21, 2016

We've made a start on Language Change as an A level topic at our college and been thinking about the different phases the language has been through. While 1600 is the cut-off point for texts on Paper 1, it's useful to look back further to see how the language started and the processes it went through to help with Paper 2 and a better overview of the whole topic.

These links from the OED site are really good for explaining the main changes, while the British Library timeline is great for the bigger picture.

The approach I'm taking at the moment is to look through the changes to lexis (word formation), semantics (meaning changes), grammar, phonology and orthography/graphology framework by framework, stopping to focus on a few more detailed discussions of things like semantic reclamation and political correctness along the way.
By Dan at September 20, 2016

Welcome to 'NEA', the component formerly known as 'coursework'

One of the new things in the A level, as opposed to the AS level, is the appearance of coursework. Except we're not supposed to call it 'coursework' any more and that's probably got something to do with political arguments about the validity of internally-assessed work in a high-stakes testing regime...but I'll save that discussion for another day and maybe some bright spark out there could do a language investigation into the semantic pejoration of the term 'coursework' in media discourses around education.

But anyway, here's a thing I've put together for our returning AS students, now embarking on the 2nd year of the A level course. It's not a complete explanation of what's involved in the Non-Exam Assessment (NEA) but sets a few starting points and offers some ideas for what you can do before you really get started.

We're not officially starting our NEA work until nearer Christmas (and just to mention Christmas seems obscene at this time of year!) but we'd like students to think ahead a bit and get some ideas ticking over.

You can find plenty of other ideas about language investigations from the blog here.

As part of the second year of your A level course, you will have two exam components and one that is called Non-Exam Assessment (i.e. coursework).

The aim of NEA component is to allow you to explore and analyse language data independently and develop and reflect upon your own writing expertise.

It requires you to carry out two different kinds of individual research:
– a language investigation (2,000 words excluding data)
– a piece of original writing and commentary (750 words each)

A project that involves you researching and investigating an area of language, setting your own questions, collecting your own data and then analysing your data and writing it all up. It’s not quite like anything you will have done before for English and requires a good chunk of time, some clear understanding of how language works and - perhaps, most importantly -  your own initiative. You will get more detailed information about the investigation as the term goes on, but will find it helpful to think about potential investigation topics as you look back at work from last year and develop your understanding of new topic areas this year.

A Language Investigation might look something like one of the examples below – which are based on topics you cover on the course – but could equally be about something we do not do on the course. As long as there is a language element to it and you can convince your teacher that it is a viable project, you can do it.

1. A study of the language techniques used by Great British Bake-Off judges when commenting on the cakes produced in the final rounds of the competition, focusing on politeness, directness and possible gender differences.
2. An investigation into the language of female boxers during interviews to see if stereotypes about female communication are true for these women.
3. A comparison of the language used by three children of different ages when responding to the same task, focusing particularly on the stages of development they are at and their ability to use vocabulary and grammar.
4. An investigation into the ways in which different political parties and pressure groups represented the EU during the 2016 referendum across their campaign literature.
5. A study of ways in which local newspapers in 3 different areas represent their local dialect and accent in reports about varieties of English.
6. A comparison of how Maybelline adverts change over a 75-year period in their representation of female beauty.
7. An investigation into the messaging styles of 3 different age groups when using WhatsApp.
8. An investigation into the ways that the language of Twitter arguments differs from those carried out face to face.
9. An exploration of the different language techniques used by three supermarkets to represent their values to the general public on their official websites.
10. A study of the linguistic techniques used by rugby commentators in a radio commentary compared to an online commentary from the BBC website.

This is not an exhaustive list and there are endless possibilities to explore, but you should be able to see that some of these link to areas you might already have studied, while others pick up on A level-only topics.

• Think about potential language investigation topics (and possible methodologies i.e. how you might approach the topic) as this first term goes on
• Start collecting data: saving articles, bookmarking links, making a note of interesting radio, TV or online shows
• Start discussing ideas with your teacher
• Read the material in your A level handbook (and in the OUP or CUP course textbooks) for ideas about how to approach the NEA

The topic choice is down to you (in discussion with your teacher) but you must have looked at a range of style models and chosen one to comment on in more detail as part of your commentary. Again, you will do some of this in class, but it is a good idea to think about the kind of thing you can write and might enjoy doing. Some suggestions for original writing tasks might be:

The power of persuasion
• A piece of investigative journalism.
• A speech delivered on a controversial topic.
• A letter to an MP.

The power of storytelling
• A short story.
• An extract from a biography.
• A dramatic monologue.

The power of information
• A piece of travel journalism.
• A blog focusing on social issues.
• A piece of local history.

Each folder submitted should contain:
• a piece of original writing
• an annotated style model
• a reflective commentary references (paper and web-based)

Read and write. Find stories, articles and speeches to read. Practise writing in different styles. Use the time in class for Directed Writing tasks as part of the exam components to experiment with form, style and voice. This is one of the few areas on any A level that allows you to write what you like.

Welcome back to English Language

Welcome back to English Language A level if you are moving into the second year of your course and hello to new AS/A level students and teachers.

This year, I'm going to try to focus primarily on the material that's new for the AQA A level, so the areas of Language Change, Child Language Acquisition and Language Diversity, including World Englishes. There's already quite a lot of material on here from the old specifications, but I'll set up some new posts linking to the most useful material and then some suggestions for new idea and activities.

As ever, I'm keen to expand the pool of writers for the blog and you will have seen some contributions from a few different writers over the last year (thanks again to them) so if you are interested, contact me via the @EngLangBlog Twitter account.
By Dan at September 06, 2016