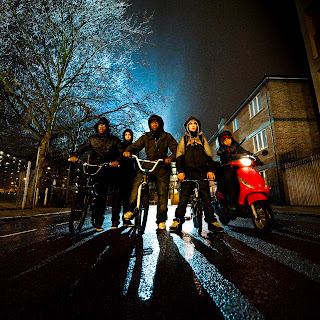 The directorial debut of Joe Cornish (one half of the mighty Adam and Joe), Attack the Block, looks like it will be a masterpiece of hoodies, tower blocks, grimy beats and... err... space aliens. But in this short ITN clip, it's not the plot, the genre or the aliens that get the focus, but the film's use of south London slang.

It's a neat little clip because it shows the slippery nature of slang's meanings. When we ran a poll on this blog a few months ago about the word "peak", it was given a range of different meanings. I understand it as meaning something similar to "hectic", which could be good or bad, depending on the context: a party might be hectic (exciting and a little bit cer-azy - perhaps with people chugging Top Deck shandy and robot dancing in the kitchen ), while a job interview might be hectic (scary and overwhelming, just too much, man).

One of the actors explains it as "getting overwhelming, getting too much, there's danger, it's getting peak", but as Joe Cornish explains, with mock-English teacher seriousness at the end, sometimes these words "can be flipped...their meanings can change overnight without any warning at all".

There's a good interview with Cornish here and the Adam and Joe 6Music site is here.
By Dan at May 05, 2011