The rents won't get it 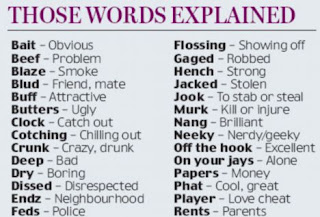 A story in today's Daily Mail tells us all about a new guide to teen slang available from here on the Parentplus website. The guide is supposed to be a "jargon buster" for parents who can't understand the language their kids are using. The article uses the usual trick of journalists (and sad English teachers like me) of trying to insert slang terms into "normal" speech for comedy effect, but fails by trying too hard (like a sad English teacher). Have a look at some examples here for a taste of what's on offer.

Language students might argue about the use of the word jargon here - it's not really jargon as such (technical language associated with a given job or activity) but slang that they're really talking about. But it's an interesting snapshot of what's going on with slang at the moment and the influence of American English, London English and especially Black British English on mainstream language.

As with any guide to slang it's got a short shelflife, with new words rapidly appearing, to take the place of old ones. Words like ace and magic which were used as terms of approval when I was a kid (the 1970s if you must know...) got replaced by sick and wicked, and now words like nang, off the hook and gully (although they're probably out of date already).
By Dan at September 11, 2008