Sling some snout into the chokey 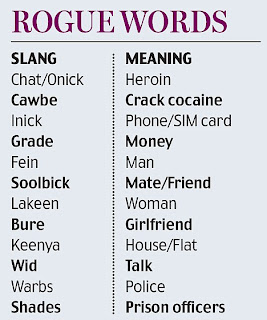 If you love slang and you love prison (and what south Londoner doesn't one day dream of slinging slang inside the glorious environs of Brikkie Pen?), then this is the story for you. It might also help you if you're looking for interesting examples of contemporary language change for Friday's ENA5 exam.

Yesterday's Daily Mail and today's Guardian feature articles on an apparently growing trend of prisoners reviving Early Modern English thieves' slang (or cant, as it's often called) to hide their illegal practices (mostly taking drugs and smuggling sim cards) from the ears of prison officers. As the Daily Mail explains, "The dialect, thought to originate from medieval gipsies, was used by all manner of villains in Shakespeare's England, becoming known as thieves' cant or rogues' cant. But it was thought to have become obsolete until its unexpected revival, believed to have been led by criminal members of the travelling community".

The Mail tells us that words like those featured on the list at the top are being used as code, while The Guardian goes into more detail about other types of slang (pig Latin and backslang) which help both exclude outsiders and foster in-group identity. What The Daily Mail doesn't really explain is how Elizabethan slang had words for crack cocaine and sim cards. Hmm...

As it happens, I'm reading a really excellent book on slang at the moment by Michael Adams, called Slang: The People's Poetry, which has some fascinating ideas about what slang is, how it's perceived and what it's used for. As Adams points out, slang has social value and he is concerned with finding out "how it marks groups off from one another and indicates group membership, its use among different races and genders, the extent to which it belongs to the young and eludes the old, and how we use it as social currency to negotiate our way through problems of living with others".

In this particular case, it would seem that an old form of slang has been revived as a means of eluding prison officers and fostering group identity among prisoners and their contacts on the outside, but also perhaps as a means of keeping a tradition alive. If, as the Daily Mail speculates, the slang being used has its roots in thieves' cant of the Sixteenth Century, perhaps it's part of a means of preserving a culture too.
By Dan at June 09, 2009