Following on from the last blog about AO2 on Paper 2, another aspect that I think it is important to address, for hitting Levels 4 and 5 in particular, but more generally in terms of an understanding of language across the board is that of the overlapping nature of the ‘topics’ on Paper 2. I use ‘topics’ in slightly wanky quote-marks because I think there’s often an issue around the word that I hadn’t really twigged until the new spec appeared. For some, ‘topics’ are just blocks of content, often optional ones from a wider list, so if you used to teach the old AQA B spec, you could choose from 3 topics on ENGB1: language and technology, language and power and/or language and gender. A few centres taught all three, most seemed to do two of the three and I think some might have just done one and crossed their fingers and hoped that it was a nice question.

This is clearly very different with the new spec; the topic areas (if I can call them that without falling into the ‘topic’ trap) are all related in various ways. We have areas such as occupation, class, gender, ethnicity and world Englishes all floating around in various forms and there’s a lot of overlap between them. For example, where does social class and language fit in? Is that part of social groups or is it more related to region? And what about language & occupation? Is that part of social groups or a different area entirely? I think the simplest thing is to actually go back to the spec and see how it’s laid out there.

To me, it makes sense to use this as the starting point and to think about the overlapping nature of all these areas before really going into detail into all of them and considering the most relevant examples, studies and theories to explore. By that I mean – a bit like I mentioned in the last post – to think about the core concepts to begin with and then map the detailed knowledge back from there.

An example of this is UK dialects and the ways in which they have changed over time. If you look at work carried out by the Universities of Cambridge, Zurich and Bern in 2016, they have traced dialect change using an app and compared the findings of their survey to the Survey of English Dialects gathered between 1950 and 1961. While there are differences in their methodologies and some variables that might have altered, what’s really clear to see is that in some areas, dialect terms have almost completely disappeared. What’s also interesting is that accents have changed too but not always as obviously. So, with this dialect levelling we are actually seeing a change taking place over time in the way that English varies. There appears to be less variation now than there was in the mid-20th Century.


Another example is that of word meanings. Again, this is ostensibly a change issue – word meanings changing over time – and therefore a change ‘topic’. But how do word meanings change? They don’t just change overnight and in fact at any given point, lots of people will have a very different understanding in their own minds about what words might mean.

Take recent examples like ‘gay’ and ‘awesome’ (both looked at by Justyna Robinson in 2010). At any time, there will be multiple – often age-differentiated - meanings for the same word. 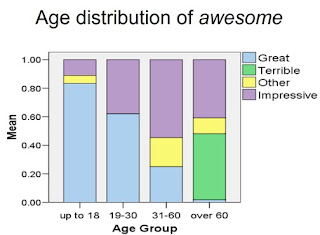 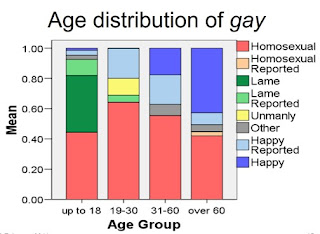 There are other contentious terms that have different meanings for different age groups. I remember having a heated debate with a bloke at football last year because he’d used the word ‘mong’ to describe a player on the home team. I objected and told him that it was a disgusting word to use, because it was an offensive term for people with Down's Syndrome. He couldn’t see the issue and claimed it meant nothing like that and I heard him grumbling later to someone he was with that “You can’t say anything now”. Who was right? Maybe we both were. I was brought up in a time when the word ‘mong’ was tossed around as a casual slur and it was linked to the word ‘mongoloid’ which had been used to describe the facial appearance of those with Down's. He was younger than me (and bigger, so I’m glad it didn’t come to blows) and denied point blank that it meant anything like that to him. I’ve had similar discussions (although usually less sweary and heated) with students who have used the term and been oblivious to its older meanings.

It doesn’t just have to be slurs and slang under discussion though. Even this week, there has been debate about the meaning of the word ‘sausage’ in relation to Greggs’ new vegan sausage roll. “How can a sausage roll be vegan when a sausage has to contain meat?!” shouted some angry gammons. “Sausage is all about the shape, fam. Allow it!” responded some millennial snowflakes. This is how change often takes place: meanings gradually shift, are contested, complained about and often take a while to bed in. (If you’re interested in this, John McWhorter’s ‘Words of the Move’ is a brilliant book about how and why change happens and a recommended read for everyone studying this course.)

So, there’s overlap between change and diversity, but what about within diversity? The key point for me here is to make sure that before diving into the study of areas like gender and occupation, all students are completely clear about the bigger picture. Most sociolinguists these days don’t subscribe to a ‘pigeonhole’ view of language – that the ‘categories’ you are born into, be they your class, region, sex, race, or whatever, dictates your language use. That’s far too deterministic and doesn’t really reflect the nature of language as we use it in the real world and the variation within groups.
The thinking now tends to be that while these factors might all contribute to your language identity in some way (and perhaps some more significantly or obviously than others), we can draw on different linguistic strands from this pool or repertoire to perform different identities with different people in different situations.

Rob Drummond and I have talked about this idea about performing identity quite a lot in the CUP Topics in English Language book, ‘Language Diversity’, that we collaborated on but you can also find more about it in sources such as Penny Eckert’s ‘Jocks and Burnouts’ Detroit study, Jenny Cheshire’s Reading study, Kevin Watson’s work on the Liverpool accent and performing a Scouse identity, Carmen Llamas’ work in Middlesbrough and Emma Moore’s Bolton study. There’s a lot of new work going on around it too and it’s a very productive and interesting area for students to explore.

That understanding of language as something that we can choose to use to construct a version of ourselves in different contexts is one that underlies a lot of the ‘interplay’ alluded to in the indicative content on the mark scheme for Level 4 of AO2 in the June 2017 paper and the “different views, approaches and interpretations” in the Level 4 performance characteristics each year.

So, how could you approach this in practical terms?

Case studies are a way to introduce this. By looking at some real (or made up) examples of people’s language backgrounds, you can explore the language they use in different contexts and where that comes from. We included one such case study of a former A level English Language student from south London, Shahnaz, in the OUP textbook and this might give you a flavour of the kind of approach you could take. You could also ask students to start building up a picture of their own influences, but a problem with doing this with A level students is that while there may be a degree of social, ethnic and perhaps even regional and international variation among them, they are all of a similar age and you might be teaching in a single sex school. While you can get somewhere with this and start to help students unpick the different influences on their own linguistic behaviour, it might be more useful to start with a few case studies that allow you to show different features and factors at work. Just off the top of my head, I might look at David Lammy, Maxine Peake, Stormzy, Danny Dyer and Scarlet Moffatt, but there are plenty of others who could be interesting case studies to examine.

The next step might be to gather language from these people used in different settings and to think about what it is specifically and linguistically that’s interesting to talk about. Does David Lammy use the same kind of language in parliament as he does on Twitter? Has Scarlet Moffatt’s language changed in different settings since she first appeared on Gogglebox and I’m A Celebrity? You’d need to be careful to avoid scripted performances, but there’s plenty to look at.

What’s also important with each case study is to really show what you mean by language variation – in other words, the characteristics of language that can vary on a lexical, semantic, grammatical, phonological and pragmatic level and how these can be illustrated.

Once you have looked at these case studies, you’ll be able to think a bit more about the different topic areas and how to approach them, because you’ll no longer be looking at them in isolation, but as part of a much bigger picture of language variation and diversity.

I hope that gives a few ideas about how to deal with the overlapping nature of parts of Paper 2. In the next blog, I’ll have a look at how to encourage students to use case studies, research and examples and to write linguistically about the issues at the heart of Paper 2. It might take a little while, but there will be other blogs along soon from other writers. Huzzah.