If you are still working on your NEA original writing commentary, or just polishing it up for submission, here are a few bits of advice.

We covered the NEA commentary a while ago here on the blog, but there are a few other things I'd add to that, having seen hundreds and hundreds of folders since then.

Think carefully about the genre of your style model and your own piece. Genre is the key to doing well on AO2 and is often - according to the Lead Moderator's report - one of those areas often not done very well. What does 'genre' involve? It's basically about the kind of text you're writing, how you might classify its type. But as with any classification, there will be some texts that fit really neatly into a genre, others that seem to straddle genres and others that are harder to pin down.

Daniel Chandler, a media and visual arts theorist, talks about a traditional view of genre in An Introduction to Genre Theory:

For the purposes of your English Language work, I'd argue that these - theme, setting, structure and style - are all very relevant, but that it's perhaps structure we see done less well at the very top end. While the content side of things is often quite well-handled (think of thrillers, ghost stories, dystopian fiction etc and you'll have a pretty instinctive grasp of what is going to appear in them), it's the form side of things we don't see done as well.

So, have a think about this in relation to the two texts you're looking at (the style model and your own piece). Which structural elements are linked to the genre? How are they important?

An example. You're writing a dramatic monologue to be performed on stage or in front of a camera. The structural elements of the narrative might be deliberately designed to delay key information about the narrator's character: that's a key structural aspect of this genre.

However, it's also worth bearing in mind that genre isn't always that simple. As Chandler goes on to point out: 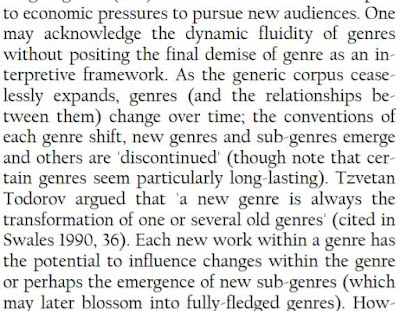 So, you can manipulate and experiment with genre, and that's what I think the mark scheme is driving at in the descriptor in Level 5 for AO2 of 'demonstrate understanding of genre as a dynamic process'. Some kind of understanding that what you have written (and even perhaps, the choices made in your style model) as being more than just a tick-list of features to add, but a set of choices that writers make for all sorts of reasons seems to me to be a good way to show evidence of this descriptor.

On a simple level, you might argue that being able to identify the features of a genre and then use them is one kind of skill, but it's another level of skill to be able to understand the nature of the genre and explore it, test its limits and even mix it with another. If you can combine this with a discussion of the language you've used and the representation and effects you've intended to create, then it could form a good blend of AO1, 2 and 3. Talk about both texts together and offer a clearly written line of argument, and you're doing all 5 AOs well.

So, if you're still working on your commentary, give this some thought and if the idea appeals, have a bit more of a read of Chandler's ideas about genre and see what you make of them.
By Dan at March 24, 2020