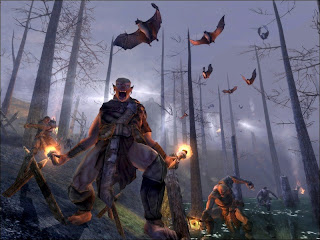 The internet has speeded up the pace of language change and led to new varieties of English which are often limited to relatively small communities of practice (groups of language users linked by a shared interest or practice, such as online gaming, hacking, phishing, 419 scams etc) but which often leak out into wider society and affect the mainstream.

Many of the words associated with online gaming in particular are interesting from a language change point of view, often consisting of the usual blends, acronyms and initialisms, but also a weird range of semantic changes and random fluctuations and errors which become "real" words in their own right.

One word, the blend playbourer - a person employed to "farm" gold in a MMORPG (Massive Multiplayer Online Roleplaying Game) and then sell it on to other gamers - is reported on in today's BBC News. It's a form of sweatshop labour that fuels a black economy of gold-spammers (people who send you endless spam messages about buying virtual gold with real money) but I can't see a World of Warcraft fairtrade movement springing up any time soon.

Elsewhere terms like owned and pwned have grown in popularity. Owned has a similar meaning to the London slang boyed: defeated, beaten or humiliated. So, to get owned (the passive form of the verb) is is to be beaten. In gaming this seems to refer to any dramatic defeat at the hands of NPC (non-player character) enemies or other players. The obvious link to the traditional sense of to own - to possess or have - suggests that this usage might be seen as a broadening, a form of semantic shift where a word changes its meaning while leaving the original word with its original meaning. And rather like to boy, or even to merk/murk (generally meaning to beat up, destroy or kill, possibly* derived from a shortened version of mercenary, a paid soldier), slang terms with connotations of victory, violence and competitive prowess often move into use in areas of sexual behaviour. Take the recent Dizzee Rascal and Calvin Harris track Dance Wiv Me, which features the romantic chat-up line "You've got a body to die for: let me merk it"...

Pwned is a weirder and maybe more interesting example of how keyboard technology can lead to variations in language use. According to this definition and this one, pwned was probably a typo (with 0 and p being adjacent keys on a QWERTY keyboard) but has now become a word in its own right. A similar example is book to mean cool, created by the predictive text on mobile phones selecting book as the first option. Again, despite originating in a mistake, this has taken off as a slang term (or at least did for a while).

And what do linguists make of this? This week's Word of Mouth on Radio 4 (listen again here) includes an interview with renowned linguist David Crystal who makes the point that the internet is spreading language change so quickly that the days of prescriptivism (the movement to regulate and "fix" spelling, grammar and meaning) are numbered as we let our fingers do the talking.

*I say possibly as there are loads of different ideas about where this word comes from
By Dan at August 22, 2008