Today's Guardian Technology has a good article about the language of social networking sites, based on research by Professor Mike Thelwall at Wolverhampton University. He's currently researching the language of MySpace and looking specifically at how sentiment is expressed, and how emotions are conveyed through creative grammar, puctuation and spelling. He's previously worked on swearing and gender on MySpace (covered in a good article in emag) and will be speaking at the next SFX teacher conference (he's appearing on the afternoon of Thursday 18th June, along with Bev Plester) about his research.

The article is a good read for anyone looking at technology and Language Change in A2, but it's also interesting from an AS Language & Mode perspective because it covers many of the features of computer-mediated communication and how orthography can be used to convey some of the patterns of spoken English.

The research is presented here in more detail and the previous work on swearing and MySpace is here.

As the article points out, MySpace is no longer the "top dog in social networking", having been superseded by Facebook and maybe to some extent Twitter, but the open nature of MySpace and the accessibility of its data makes it an attractive proposition for researchers. And who's to say that the patterns apparent in MySpace data won't be pretty much identical to those in other social networking applications?

The table here gives a quick rundown of some of the main non-standard features found in MySpace comments and should give you a chance to think about how this kind of thing might link to your ENA5, ENA6 or ENGA1 exams. 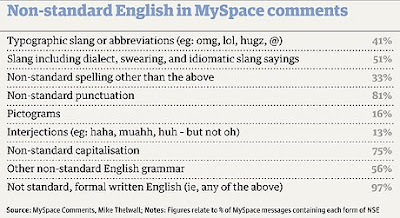