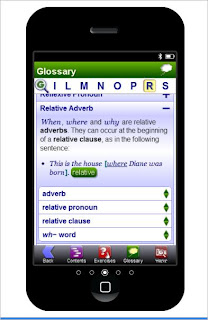 I've not normally used this blog to plug commercial products and my income from Amazon ads has amounted to a massive 29 pence, but this product's been developed by colleagues of mine at UCL (and if they sell enough, I might just keep my job).

The interactive Grammar of English (iGE) is an app for the iPhone 3 and 4, iPod Touch and iPad, designed to help you develop your understanding of English grammar. It uses examples of real English from ICE-GB, the International Corpus of English and contains many interactive tests and tasks.

If you're looking for a way into understanding grammatical frameworks for A level English Language or for developing your grasp of higher end concepts for undergraduate or post-graduate study, it will definitely be really useful.

One interesting area of debate about language which has already been raised in a 3-star review of the app on the American i-Tunes site is about the use of "incorrect" English in examples of spoken language:

I'm a substitute teacher and was looking for an app that I could quickly refresh my memory. This is an okay app but there are some errors. I was always taught to not use uhm and ah in a sentence, however, in the test areas the sentences often use uhm as if it had been created by someone dictating. There are also run on sentences and incorrect punctuation in the tests. The glossary seems to be correct and will be a good reference when I need it.

Should a grammar app use "good" English examples which avoid uhms and errs, and run on sentences? Well, we would argue that analysing grammar is not just about analysing "perfect" written English but about looking at all types of English - written and spoken - and studying their grammar. Part of the appeal of an app like this which uses a corpus of genuine English , rather than made-up examples, is that it allows us to look at how English is really used, and to describe its grammar rather than judge it.