This is an activity I've been using for revision of Question 3 on Paper 1. The texts are all ones I've used before and some might be recognisable from courses and/or resources I've presented before, but I think the activity is a new one (for me, at least). The idea is to think about connections (the AO4 bit of Q1-3) by quickly identifying them (points of similarity or difference) and then including a language point to support each one. This starts with short texts and then moves on to slightly longer ones, so you might want to find more than 2 connections in these later ones. The point is to read the extracts and identify points as quickly as possible...

Rather than look at lots of pairs of full texts, you might want to try some quick comparisons of shorter texts for Question 3. Read each pair of extracts quickly and identify two points to compare/contrast. Each time, try to make the representation of the topic one of your two points, but then vary the other point from the following list, so you have discussed a range by the end:

Identify at least one feature of language for each example to help you illustrate your points.

A. Extract from TV cookery show

Fry the pancetta in a medium frying pan over a gentle heat until it just starts to brown and crisp up, then add the thyme leaves and spring onions and cook for a further 3 minutes.

A. Spoken account from beginning of a story about an incident at school (Source: QMUL spoken language resources)

Zack:  no it was like (.) it was the end of school yeah so that school's finished yeah

and everyone was going home

and I was getting my bike from the bike rack

and I was going out

and I was riding my bike

and he stopped my bike.

and he goes "get off the bike”

B. Extract from an Arthur Conan Doyle story (1903)

A quarter of an hour passed, and then a second cyclist appeared. This time it was the young lady coming from the station. I saw her look about her as she came to the Charlington hedge. An instant later the man emerged from his hiding-place, sprang upon his cycle, and followed her. In all the broad landscape those were the only moving figures, the graceful girl sitting very straight upon her machine, and the man behind her bending low over his handle-bar with a curiously furtive suggestion in every movement. She looked back at him and slowed her pace. He slowed also. She stopped. He at once stopped, too, keeping two hundred yards behind her. 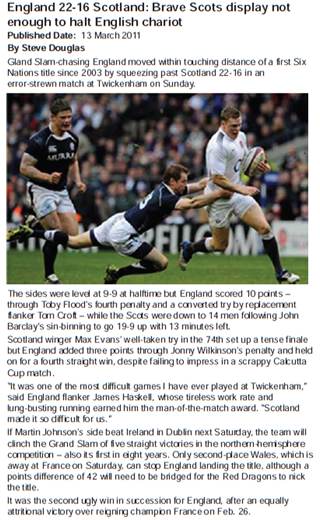 B. An extract from The Scotsman newspaper (1871) 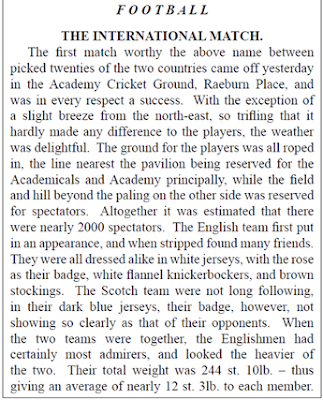 A. An account of an anti-fascist demonstration against “alt-right” Trump supporters in 2017 from an American politics website 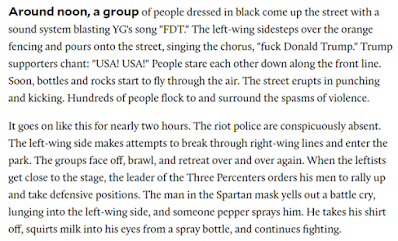 B. An extract from a letter giving an eye-witness account of part of the “Gordon Riots” in London in 1780