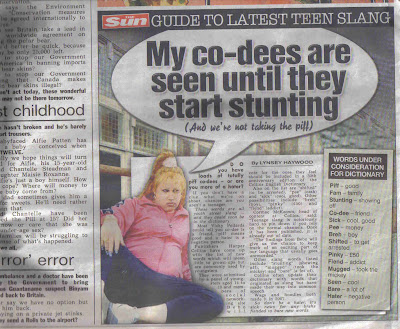 Last week's Sun has a fairly hopeless guide to teen slang (see picture) which not only puts slang words together in a silly order but also stereotypes teenagers as Vicky Pollard wannabes.

So we get lots of terms like fam, breh, bare and hater which have been knocking around for years (probably centuries in the case of breh), and others which I've not come across like piff (good), stunting (showing off) and shifted (arrested).

But what I want to know is,where does bare come from and what's its etymology? Is it anything to do with the American expression "loaded for bear" (see here). And secondly, why do young south Londoners pronounce seen as skeen? Is it anything to do with the original 1960s (?) slang word being spelt as scene and the new way of saying it just a deviant, phonetic pronunciation? These are proper questions, so if you've got any ideas please say...

And in today's Telegraph there's a story about a new dictionary aimed at young people, designed to help them understand "gran slang". As the article points out "Many of the words used by teenagers today are incomprehensible to older generations, but it must be equally baffling for younger people trying to get to grips with the lexicon of their grandparents" and the creator of the dictionary wittily adds "No longer will the word mint, used by young people to denote approval, be confused with a request for a hard-boiled, peppermint-flavoured sweet". The wag...

Edited 16.03.11 to add:
Jonathon Green, the famous slang lexicographer, has offered the following etymology of bare on The Dabbler's website:

bare, which is also found as bere, is an import from the Caribbean. It began life as a Bajan (Barbados) word meaning ‘nothing but’, i.e. ‘too much of’ and links back to and plays on the standard English barely (enough). It seems to have emerged in the UK in the late Nineties, first among black and then all teens, who use it to mean ‘many’ or ‘lots of’.

For ‘bare’ examples, I offer a 2003 interview with Dizzee Rascal in Vice Magazine:


I got kicked out of bare schools. [...] Bare people were getting pregnant around me in the manor, getme? Bare girls were getting breeded up. [...] There’s just so many talented people but road gets a hold of them, bare people I know could have made it. [...] One little thing gets out, gets changed, changed, by the time it goes from two people to bare people. [...] Oh yeah I’ve heard bare times that I’ve been shot.