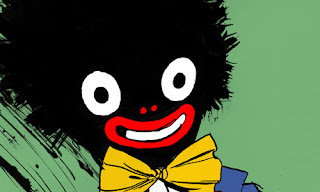 Carol Thatcher's recent use of the word "gollywog" to refer to a black tennis player and her subsequent sacking as a BBC presenter have sparked debate about racist language and Political Correctness. On one hand, you've got those who argue that the word "gollywog" has carried racist connotations for so long that its use can never be excused, and on the other hand you've got those who argue it's harmless - just a word used to refer to a cuddly children's toy - and that it's PC (quite literally) gone mad.

Yesterday's Daily Mail had an article about it (thanks to Miss "Smudger" Smith for this) and today has several articles ranting against the totalitarian media elite who run the BBC. "Bloody communists telling us we can't call darkies and wogs what we want to" seems to be the gist of Richard Littlejohn's and Mad Melanie Phillips' columns.

Today's Guardian runs several features about the word, the doll and the recent media outrage. In one, Mike Phillips argues that the history of racial stereotyping and racist attitudes expressed through language make the word a no-no. Here, Jon Henley charts the background to the toy and the word, and here Hannah Pool gives a personal view of the word and the toy. As she says:

When I hear the word a red mist descends: I don't want to see it, or even discuss it, all I want is for people to stop saying it and take the damn thing out of my sight. I do not care whether or not it was considered racist when it first appeared in 1873, a fact which is pretty weak as arguments go, I mean come on, how many black people do you think were asked about it then?

Elsewhere, a linguist from Language Log has drawn together this story, Princes Harry and Charles' recent racist remarks into an interesting post about attitudes to racist language and taboos.

And here's a link as suggested by Shane Kelly (see comment below) from today's Times, written by the Nigerian poet and author Lola Shoneyin.
By Dan at February 06, 2009