There's nothing I like for breakfast more than a big banana.
Can you pass me the bag of nuts?
I think I'll have the sausage, please.

What connects all of these seemingly innocuous food-related comments? Well, if you're an NBA basketball player, you'd probably want to insert (oo-er) the word pause after each. Why? To avoid sounding like you're gay, obviously. So, "I'm right behind you", "I've got your back" and "That driver was right up my arse" would all qualify as potentially smutty innuendoes requiring the pause treatment. Because to be gay in the macho world of professional sports is to be bad. Hell, it's even worse than being a girl! 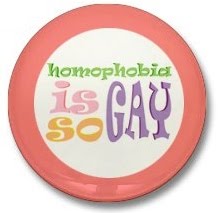 Pause - according to Urban Dictionary - is used "to negate the sexual connotation of a comment" and has been recently appearing in spoken language and social networking (often Twitter) comments, perhaps following the patterns of usage of its slightly older brother no homo, which has been around since (apparently) the early 90s in hip hop slang and beyond.

The attempts by some men to police their own language use and avoid the potential embarrassment of letting slip a comment that might be perceived as gay are both interesting and slightly pathetic. Sociolinguists often look in detail at the language markers that help us define our identity and note - like Deborah Cameron does in her Myth of Mars and Venus - that we often use language as  much to define who we are not as who we are. So, in other words, the use of pause or no homo, could be a deliberate attempt to distance some men from gay men (or the stereotypical language styles associated with gay men). But why not just avoid saying things that are... like "gay"...in the first place? Well, that would be missing the point, because the whole point of using pause seems to be to draw attention to your words and encourage salacious connotations to be drawn from them before distancing yourself from the implications of the interpretation. Or something like that...

What's pathetic about it shouldn't be too hard to see. Do gay men really mince around discussing the relative merits of big bananas or succulent sausages? Probably not (unless you're Julian Clary). The whole use of pause might be seen as harmless fun, self-conscious mockery even, but at the same time it's peddling a view that gay men talk in a certain way which is easily identified and ridiculed, and that they are sex-obsessed, double-entendre-fixated "others". Some may be - surely that's up to them - but it's a lazy stereotype to assume it applies to all gay men.

So, is pause homophobic? Possibly. Is it dangerous? I'm not sure. There have got to be worse forms of linguistic homophobia than this - name-calling, abuse - but it probably says more about the speaker's attitudes to homosexuality than it does about gay men themselves.

Jay Smooth's brilliant video clip says it all so much better than me except he argues that pause came before no homo and is now (in his words) "played out", old, boring.