Another side of English Language study

In yesterday's post I mentioned that linguistic analysis is part of what you do on this course, but another aspect of language study is language itself: how people use it in different situations and for different reasons.

Sociolinguistics is the name given to the study of language in relation to society and in many ways that's what a lot of this course is about too. Each individual uses language in a different way and as groups of people - whether it's groups based around things we do together (football, online gaming, dog obedience courses, charity work), around the place we live in or the social class we are born into - and we all use language to do different things.

As part of your work on Paper 2, you will look at how to study these differences, but you'll also become increasingly aware of how there are many similarities too, not just in the actual language we use and are familiar with, but how we alter our language to suit particular situations (job interviews, casual chats, writing emails) and to perform different aspects of who we are.

In fact, differences in language are often overplayed by some commentators who want us to believe that women and men have totally different language styles, or that young people's language is entirely closed off to anyone over 25.

So why is language presented to us like this? That's another aspect of what you'll be doing: studying how language is discussed and debated and as part of the Language Discourses work you will do on Paper 2 you will see that there are all sorts of reasons for this. Some of them are unintentional - people fall into easy assumptions about language use because they appear to be common sense - but others are more obviously deliberate and sometimes deeply political.

Back in September of 2016, a report was published by two language researchers exploring what English might look and sound like in 50 years' time. As this post points out, their work led to a lot of media coverage, not all of it very positive. I wrote about this elsewhere, in the NATE magazine, Teaching English last year:

Having produced such an interesting report, it might have come as something of a shock for them on the morning of September 29th to find the following headlines plastered all over the nation’s breakfast tables and white van dashboards:


'Th' sound to vanish from English language by 2066 because of multiculturalism, say linguists
(Daily Telegraph http://www.telegraph.co.uk/science/2016/09/28/th-sound-to-vanish-from-english-language-by-2066-because-of-mult/)


MUVVER TONGUE ‘Th’ sound vanishing from English language with Cockney and other dialects set to ‘die out by 2066 because of immigration’
(The Sun https://www.thesun.co.uk/news/1876518/th-sound-vanishing-from-english-language-with-cockney-and-other-dialects-set-to-die-out-by-2066-because-of-immigration/)


It's the end of the frog and toad for regional slang, says report.
Sounds of 2066 report says ‘talking to machines and listening to Americans’ will kill off British accents and slang in the future.
(The Guardian https://www.theguardian.com/education/2016/sep/29/its-the-end-of-the-frog-and-toad-for-regional-slang-says-report)


The Daily Mail initially led with the headline "Is immigration killing off the Queen's English?" before changing it to the more neutral “What do you fink of dis? The 'th' sound will disappear from speech within 50 years as urban dialects spread.”
(http://www.dailymail.co.uk/sciencetech/article-3812071/Will-regional-accents-die-Experts-predict-technology-cause-voices-change-50-years.html)


And last, but by no means least, “Queen's English to be WIPED OUT from London 'due to high levels of immigration'”.
(Daily Express http://www.express.co.uk/news/uk/715623/Queen-English-wiped-London-high-levels-immigration-2066-university-york-Dominic-Watt)

Among all the interesting angles they could have taken - technology, changing workplaces, new youth subcultures, more international travel -  some papers seemed obsessed with immigration and multiculturalism. Language doesn't exist in a vacuum and the arguments and discussions about it are all about the society we live in and the politics and economics of that society.

Only last week, a right-wing commentator put this tweet out about the number of children apparently not speaking English as a first language: 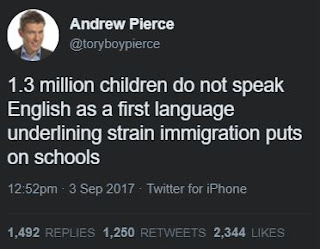 The responses, as well as the retweets and likes, were interesting from a number of perspectives. The headline figure was challenged, with the point being made that not speaking English as first language doesn't mean you can't speak English... 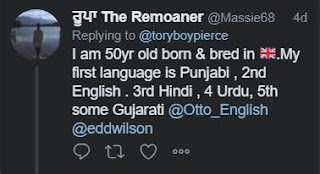 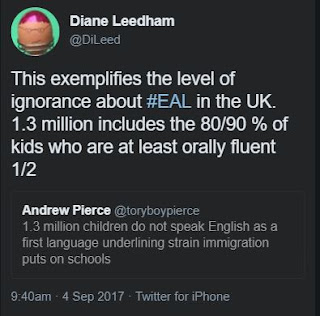 ...challenging the methodology of the survey and the statistics used for the basis of the tweet...

...before moving on to talk more broadly about supposed notions of "correct" and "incorrect" English, with a few inevitable digs at people's online literacy... 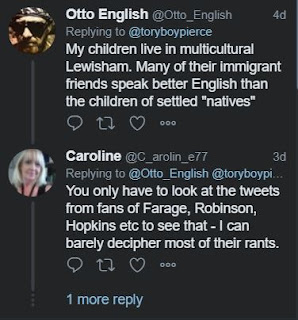 And the arguments are very similar over many other language issues, whether it's "accent discrimination", the rise of multicultural urban British English (MUBE), the supposed death of British dialects (dialect levelling) or the use of "politically correct" (PC) terms to describe different sexual identities.

These are all part of what you might explore on this course, so be ready for some interesting discussions using language, around language and all about language.