As a follow-up to the last blog, a couple of other things that you can do as part of a longer term approach to success in A level English Language are covered below.

Get used to different kinds of data
If you're new to the course, you'll be surprised to find that parts of it are a bit more like Psychology and Sociology A level than you might have expected. Ok, we have the textual analysis that I talked about last week and the discussions around how people feel about language use, but you'll also need to get to grips with what linguists have researched and get used to the methodologies involved in language study.

What does this mean in practice? Well, you might be given something like the data below in class and asked to interpret it. What would you do with it and what does it tell you? 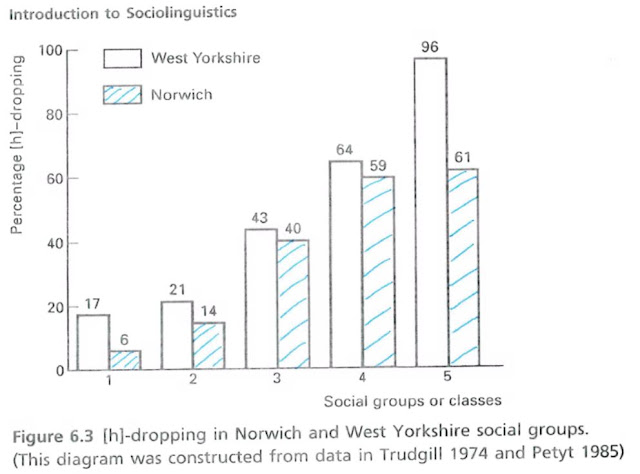 Have a think about what's being measured here: "H-dropping" is on the y-axis, a phonological process that many of us use when we leave the /h/ sound off words like house, half or Harry Redknapp. What does the graph tell us about this feature? It tells us that in studies carried out in Bradford (Malcolm Petyt 1985) and Norwich (Peter Trudgill 1974), the further down the social class ladder you go (x-axis: 1 highest class and 5 lowest), the more h-dropping there is and that this feature varies in the two locations, with Yorkshire generally seeing more h-dropping across all social classes than Norfolk.
There's more you could look at here, such as why 17% of even the highest social class in Bradford drop the /h/ or why there's such a big leap between social classes 2 and 3 in both areas, and 4 to 5 in Yorkshire.

There's also a lot it doesn't tell us. How was the data collected? Were women and men interviewed and what results did they give? What about age groups? Are younger people more or less likely to h-drop? Is ethnic background a factor - Bradford being a much more multicultural city than Norwich?

And then there's the whole discussion around why this happens and what it might reveal about the links between language and society. There's plenty of other data you'll come across too, not all of it looking like this. You'll see plenty of this in work you'll do for paper 2.


Keep up to date with linguistic research
While the studies above were done well over 30-40 years ago, linguistic research is happening all the time. When we put this book together, we tried to cover some classic studies but also offer more recent developments in each field, so students and teachers could see what had been going on and how the thinking in each area had been developing.

You can keep up to date with the very latest material from the excellent Linguistics Research Digest run from QMUL. They read through the (often heavy-going) linguistics journals and then present the research in a more student-friendly form. It's really useful and offers you some of the most up-to-date material you can find.

Lots of excellent linguists such as Deborah Cameron, Rob Drummond, Lynne Murphy, Jenny Lewin-Jones and Tim Grant are active on Twitter and write blogs and articles themselves, so these are highly recommended:
Keep a language scrapbook
There's so much going on to with English all the time that it can be hard to keep up. I'd recommend getting on Twitter and following some of the linguists, English teachers, English departments and journalists that are regularly retweeted by the EngLangBlog account, but also try to keep a record of the articles, the research and the weird language phenomena that you encounter.

All of these can be great to feed into class discussions and exam answers or even as potential NEA investigation topics (when you get to that). Keep your eyes and ears open and you'll enjoy the course more and build up a better understanding of it all as it goes on.

Next time... some ideas about why study of the darker side of language - sexism, abuse, racism, trolling and the like - is something not to shy away from.