If you are starting English Language A level this week, you might be wondering "What the hell is this subject and why am I doing it?".

That's quite a normal reaction, to be honest, and is becoming more common as the GCSE (laughably known as "English Language") moves further and further away from what I would see as genuine language study towards something else...something (in the words of Donald Trump when describing Hurricane Irma) that "looks like it could be something that will be not good".

So, what is A level English Language? Well, what it is is the best course you could possibly do for A level. It is varied, challenging and fascinating. But I'm biased, obvs. Over the next few blog posts, I'll show you a few aspects of what I think make it an interesting course and offer a taste of some of the work you can do on the course.

First off, you'll be analysing things. You'll have done this before, but you'll be analysing all sorts of language - written, spoken and all that electronic communication like Twitter, texts and Instagram, that's somewhere in between. And what you analyse won't always look important or hugely significant to the world. It won't always be Great Literature. It might be about a slang word, an emoji, a borrowed leather jacket, or even some dog poo. Let's start with dog poo to make the point.

Have a look at these two signs stuck to a fence post along a narrow footpath in rural Essex. Try carrying out a basic linguistic analysis of how each text producer (i.e. the person who made each sign) uses language to convey their particular message to the text receiver (the person/people who might read it). What different approaches do they use? What different language frameworks - vocabulary choices (lexis and semantics), grammatical structure (syntax), layout and visual design (graphology) and implied meanings (pragmatics) - could you use to analyse them? 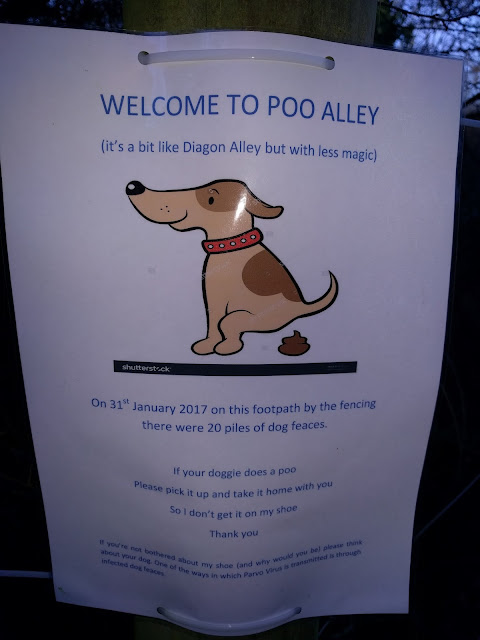 Welcome to Poo Alley
(it's a bit like Diagon Alley but with less magic)
On 31st January 2017 on this footpath by the fencing there were 20 piles of dog faeces.
If your doggie does a poo
Please pick it up and take it home with you
so I don't get it on my shoe
thank you
If you're not bothered about my shoe (and why should you be) please think about your dog. One of the ways in which Parva Virus is transmitted is through infected dog faeces. 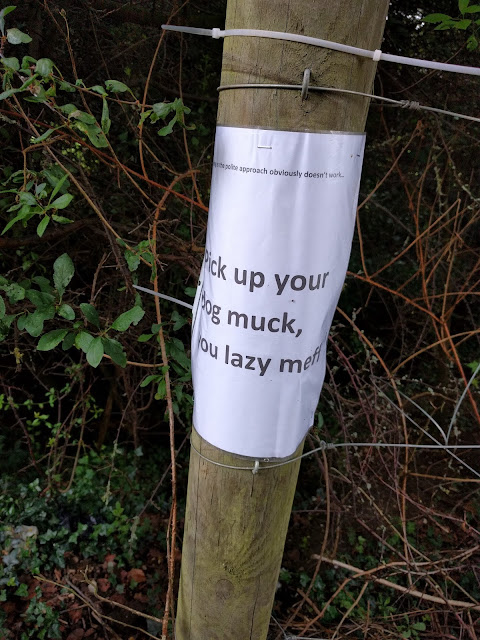 Seeing as the polite approach obviously doesn't work...
Pick up your dog muck, you lazy meff.

I won't analyse the for you, because that might make a good task for you to do in class this week, but I will flag up a few things that underline how this is very much about linguistic analysis.

I'll come back to these pictures another time, but if you have any ideas or comments, don't post them here: reply to @EngLangBlog on Twitter.